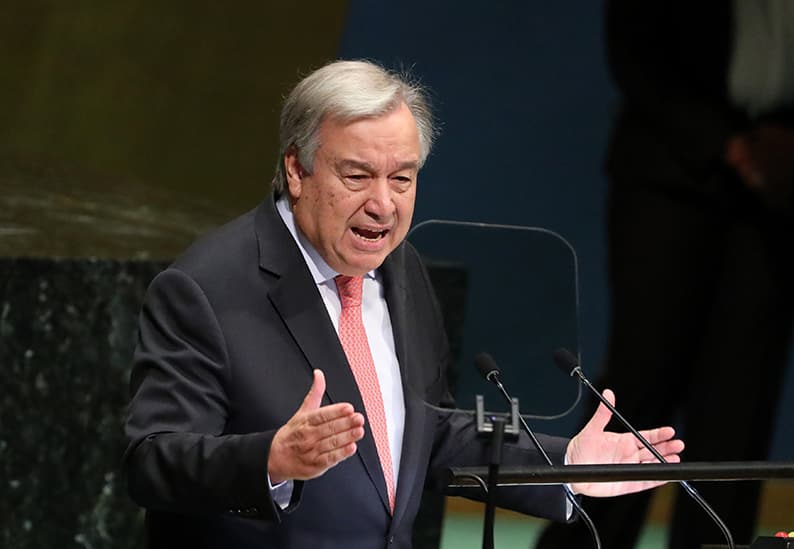 As revelations suggesting that the Greek Cypriot leadership and Turkey are binning the bicommunal, bizonal federation model, which has been on the table for decades continue, United Nations Secretary-General Antonio Guterres signalled this week that the UN is prepared to hear “new ideas” in relation to the solution of the Cyprus problem.

The UN secretary-general, in a report he submitted to the UN Security Council on his good offices mission in Cyprus following the consultations of senior UN official Jane Holl Lute, did not define what these new ideas might be.

In stark contrast to his previous reports, Guterres neither mentioned a bizonal, bicommunal federation as the model of solution, nor the unprecedented convergences reached during the previous negotiations by Mustafa Akinci and Nicos Anastasiades. He only made a weak reference to the Guterres framework, which he had submitted to the sides in Crans-Montana in June 2017, to help them resolve interdependently the outstanding issues of territory, political equality, property, equivalent treatment, and security and guarantees, stating that the sides “recall the framework of six points”.

The secretary-general’s report comes at a time when speculation of a two-state solution run high: Averof Neophytou, the head of ruling Disy, says Greek Cypriots were binning the bicommunal, bizonal federation as a form of solution; Anastasiades suggests a conference to discuss parameters relating to the Cyprus problem including confederation, and Turkey argues that there is no point in returning to the table under the same UN parameters.

It has been revealed that Anastasiades and Turkish Foreign Minister Mevlut Cavusoglu met at least twice over the last 15 months. Media reports suggest that the two have been toying with the ideas of a loose federation or confederation. In a column he wrote in Turkey’s Hurriyet Daily News earlier this week, Yusuf Kanli, who is a journalist close to the Turkish foreign ministry, stated that Anastasiades and Cavusoglu discussed the possibility of a confederation or a “decentralised federation, with stronger two states and weaker central government”.

Meanwhile, senior Turkey and Cyprus analyst Hugh Pope, who is one of the authors of a 2014 International Crisis Group report that suggested that Cyprus become two states within the EU, told the Sunday Mail that the report, which was shocking for many back then, is now being considered attractive.

“A number of senior Greek Cypriot persons have approached me and told me that they were now attracted to the proposal,” said Pope.

Turkish Cypriot leader Akinci, who seems to be missing from the debate over alternative solutions, said earlier this week that he is willing to hear from Anastasiades any novel ideas about the future of the island.

In his report, Guterres stated that he will instruct Lute to do another round of consultations to find out where the sides stand and listen to new proposals that may be incorporated as part of an overall solution. Guterres added that the sides should agree on a starting point prior to resuming full-fledged negotiations.

Although Guterres talked about a “sense of urgency” in relation to the way ahead and reiterated that the status-quo is not sustainable, there is no indication of a timeframe in the report for the preparation process.

The secretary-general, in his previous reports, had stated that the sides had come very close to a solution.

“In the most recent round of negotiations, the two leaders … had agreed on many of the key aspects of a settlement,” the secretary-general wrote in his report dated June 14, 2018. “The leaders had elaborated a shared vision of Cyprus as a bizonal, bicommunal federation with political equality and effective decision-making, anchored firmly within the European Union.”

Guterres had also clearly stated that the way to go is to build on the existing body of work. “Should the sides jointly decide to resume talks, the six-point framework that I introduced in Crans-Montana could form the basis for negotiations aimed at reaching a strategic agreement and paving the way for a comprehensive settlement.”

The reason why Guterres adopted a totally different approach in the current report is probably because Lute, during her consultations, did not hear anything from the sides that would convince the UN of the sides’ commitment to what is on the table, according to a diplomat, who follows the process closely. “And she most probably heard from more than one side that they are looking at alternatives.”

“It’s important that the report is not imposing any specific model for the state or the solution,” stated Turkish Foreign Minister Mevlut Cavusoglu. “We are not excluding any form of solution.”

The report, by encouraging new ideas and calling for a consensus on a starting point “opens the door for the possibility of endless negotiations on what to negotiate,” said the diplomat. “These pre-negotiation negotiations on what a solution should look like could take as long as the sides want them to take.”

Despite the disappointing report, observers agree that it is now up to Lute to guide the upcoming consultation process in a way that would keep the discussion within the framework of a federation, albeit loose; safeguard the body of work and convergences reached to date, and reach a consensus on an end result and a way forward by the end of this year.

Otherwise, Cyprus will be faced with the risk of 50 years of negotiations being erased and the talks starting from scratch – if they ever start.

Ryanair criticised for failing to remove racist passenger from flight

Greece suspends police officer for swearing at a migrant woman