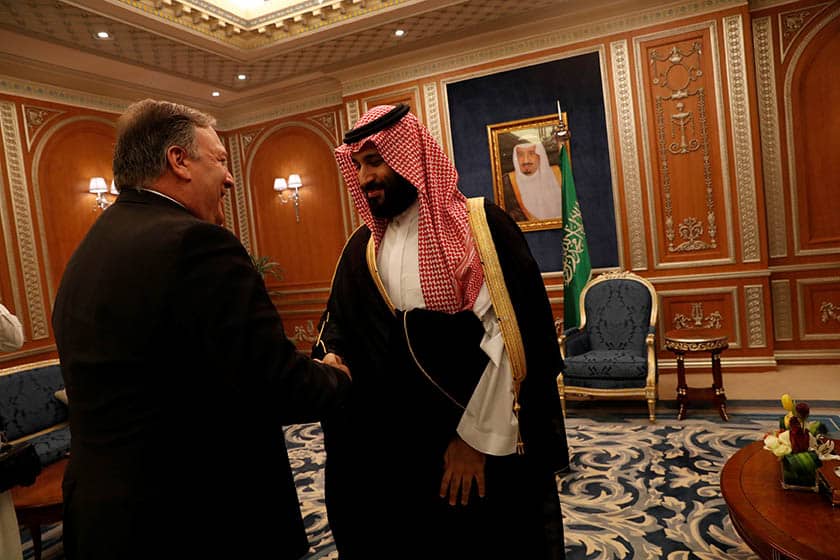 When it comes to defining America’s quandary on Saudi Arabia, US President Donald Trump’s description is mercenary in the extreme. If Washington doesn’t stay close to Riyadh and sell it arms, he told reporters in the Oval Office this weekend, the Saudis will turn to Moscow or Beijing instead. Given that, he seemed to be suggesting, the United States should just keep its plans for a $110 billion arms deal and the 450,000 jobs he says it would bring.

He has a point – and one that also speaks to the broader geopolitical and moral issues at stake. Across the Middle East, from Turkey to Iraq, the United Arab Emirates, Egypt and beyond, the more the United States attempts to inflict its will on often increasingly autocratic governments, the more they simply turn elsewhere. The messy aftermath of the so-called Arab Spring – in which governments in the region felt the Obama administration turned on them in the face of popular revolt – has seen US influence there nosedive. That in turn makes it ever harder for Washington to influence events, let alone urge democratisation and restraint.

The real question, though, may be how much appetite America really has to keep engaging in the region. That terrible things happen in the torture chambers and prisons of its foes and allies alike has never been in doubt. The reported graphic brutality of the alleged torture, dismemberment, and killing of journalist Jamal Khashoggi in a Saudi consulate in Istanbul earlier this month, though, may yet prove a game changer.

The United States still has clout – that much is clear from the speed with which Saudi Arabia’s King Salman and Crown Prince Mohammed bin Salman met this week with US Secretary of State Mike Pompeo. The oil-rich kingdom and preeminent global superpower clearly still feel they need each other – as Pompeo said after the meetings, neither side wanted to talk hard facts about Khashoggi, preferring to wait for the outcome of Riyadh’s own investigation.

The Trump administration and Saudi royal family have exerted considerable effort to build close relations with each other in the last two years. The Khashoggi case, however, looks to have supercharged existing worries on all sides over the value and future of such dealings. Even before the latest crisis in relations, growing numbers of US lawmakers wanted US arms deals stopped and were openly discussing sanctions against the Saudis. Two major US lobbying firms have now also cut their ties with Riyadh.

Saudi officials, so far at least, deny involvement in any killing – despite reports that they are likely to say Khashoggi died during an interrogation gone wrong. But if, as suspected, those in power were involved, it would suggest just how little they care for US and wider Western handwringing. Yet pulling Western support could yet – in some respects, at least – make some matters even worse. In Yemen, for example, where Riyadh is leading a coalition against Iran-aligned rebels, a Saudi air campaign using more indiscriminate Russian-style weapons and tactics – as seen in Syria – could kill even more civilians than the thousands who have died already.

Even Mideast states that were once seen as relatively moderate Western allies are increasingly playing by their own rules. On Tuesday, Buzzfeed reported that the United Arab Emirates had hired US mercenaries in a botched assassination plot in Yemen. The same day, the UAE announced it was charging a British PhD student with spying after detaining him during a study trip. Such actions are causing disquiet in London and Washington – but few leaders in the region seem to care.

Almost every part of Middle East politics now reflects that trend. When demonstrations erupted in Syria in 2011, the Obama administration agonised over how best to use American power. It arguably chose the worst of all possible options, encouraging the rebels without giving enough support to make a significant difference. Having largely won on the battlefield, Russia and the regime of President Bashar al-Assad now clearly call the shots – with the United States little more than a bystander.

For all the recent reports over Ankara’s release of an imprisoned US pastor, Turkey under President Tayyip Erdogan has gone out of its way to distance itself from Washington, most obviously through the purchase of a Russian air defence system. In the Gulf, attempts by both the Trump and Obama administrations to smooth relations between US ally Qatar, the UAE and Saudi Arabia have fared no better than their efforts to manage the Yemen war. Even in Iraq, still heavily dependent on US military aid, successive governments have been more open to Russian and Iranian influence.

It’s a trend that will likely further accelerate in the years to come. Any future US Democratic administration, whoever leads it, is likely to have even less appetite than its predecessors for military adventurism or cozying up to Middle East strongmen. European governments are even more cautious. Both the Iraq and Libya wars are seen as stark warning against future entanglements, at least any that go beyond the kind of anti-jihadist operations seen against Islamic State in Iraq, Syria and elsewhere.

Where moral and even practical lines lie is unclear. I often think back to my days as one of the reporters covering the war in Sri Lanka as it resumed in 2006. The government atrocities we reported helped prompt the West to cut back military aid. China and others filled the gap, almost entirely with even more indiscriminate weaponry – and the death toll skyrocketed in consequence. In many respects, the entire Middle East – and Yemen in particular – is now a test bed for the same fundamental dilemma. It’s tempting to say the West should play no part in it – but that in itself has its own consequences.

Western patience with Saudi Arabia has been running out for a while – not least over Riyadh’s longstanding blind eye to internal support for Islamist extremism and sometimes militancy abroad. If the Khashoggi disappearance is not the last straw, an unfolding humanitarian catastrophe in Yemen perhaps should be. But while Trump’s characterisation of the situation might be crass, he has correctly identified just how tough – and perhaps simultaneously pointless – the choices have become for both him and his successors.

When a president changes course he should warn his people