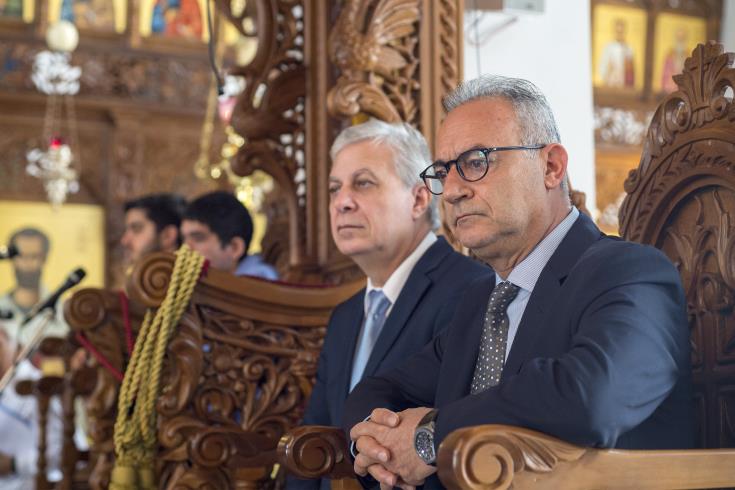 Ruling Disy leader Averof Neophytou said on Sunday that in view of the meeting between the two leaders on Friday, he would continue in the meantime to have contacts with Turkish Cypriot politicians and parties.

He was speaking hours after Turkish ‘foreign minister’ Kudret Ozersay  revealed he had met recently with Neophytou to discuss the Cyprus issue ‘outside the box’.

According to CNA, Neophytou said he would make it clear however that the possibility of a two-state solution for Cyprus was not acceptable but that the sides should work towards reunification.

In statements in Limassol, Neophytou was asked to comment on the interview Ozersay gave to Phileleftheros, which was published on Sunday where he spoke about the informal talks currently going on.

“I am not the negotiator. I am the leader of a party that was established for the sole purpose of being the political force for prudence and wisdom to get rid of the occupation.”
Neophytou said had two meetings with Ozersay and had also met Turkish Cypriot ‘prime minister’ Tufan Erhurman, also the president of the Republican Turkish Party and he will also have a meeting with former Turkish Cypriot chief negotiator Ozdil Nami.

“I do not deny it. I take initiatives to meet Turkish Cypriot politicians and political parties to repeat what I say publicly, that two states do not fit in Cyprus, that we must try to reunite our shared homeland,” he added.

Neophytou said his aim was to support President Nicos Anastasiades in his attempts to reach agreement with Turkish Cypriot leader Mustafa Akinci and to return some hope to the Cypriot people, Greek Cypriots, Turkish Cypriots, Maronites, Armenians and Latins.
“Cyprus is big enough to fit all of us and too small to be divided into two,” he added.

“Within these parameters we can find the solution and not through the ideas coming from Turkey for two states in the guise of a confederation.”

Neophytou said there may be voices within the Turkish Cypriot community that do not differ from the Turkish position on two states or a confederation of two sovereign states, but at the same time there were also very encouraging voices like that of the president of the Republican Turkish Cypriot Party.
He said Erhurman was in agreement with him that they were in discussions about a federal model that will have an international personality and one sovereignty. “We also need a common economy, an EEZ [exclusive economic zone], a FIR [Flight Information Region], and one currency,” he added.

According to Neophytou, there was a clear signal for a debate on a decentralised federation.

“If we do not realise that in order to be able to have the hope of getting rid of the Turkish occupation and the risk of full Turkish rule, we must understand the concept of political equality towards the Turkish Cypriots,” he added.

“On the other hand, our Turkish Cypriot compatriots must realise that without the release of a united Cyprus from foreign guarantors and foreign troops, we, the Greek Cypriots, cannot agree to a solution.”

New party launched with promise to speak for real centrists

Sheep replace traffic in the heart of Madrid