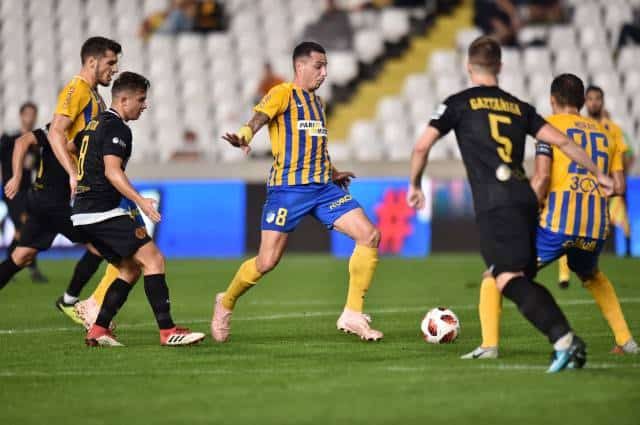 Top of the table AEL and champions Apoel played out a dire 0-0 draw at the GSP while Apollon hit five past Ermis Aradippou to move within a point of the top, while Anorthosis faltered again picking up just a point at Paralimni.

Nea Salamina continued their impressive start to the season with a 1-0 win over Omonia while AEK took the three points against Doxa Katokopias with three late goals at the Arena stadium.

It was Paolo Tramezzani’s first game in charge of Apoel since taking over 10 days ago and it was evident right from the start that his priority was not to concede a goal.

His deployment of three defensive midfielders in his starting line-up shored up Apoel’s leaky backline that had previously let in nine goals, but going forward the champions were toothless, especially in the opening 45 minutes.

This is not to say that AEL, who had won all five of their opening games, were any more adventurous. They had 60 per cent of possession but failed to create many clear-cut chances.

In fact their best chance came after a mistake by Apoel’s Artymatas allowed Alex da Silva a free run at goal but he dragged his shot wide.
Both managers said that their philosophy in football is to win all games but on Sunday’s showing they have found a strange way of achieving this.

Apollon continued their impressive start to the season as they cruised to a 5-0 win against Ermis Aradippou at the Tsirion stadium moving to within a point of AEL at the top and remaining the only team in the Championship that has yet to drop a point.

It proved an easy afternoon for Sofronis Avgousti’s side especially after their early goal in the 10th minute that also saw Ermis reduced to 10 men. The red card was shown to Quarsika for pulling down Zelaya for the penalty that led to the home side’s opening goal.

A Psaltis own goal doubled the score for Apollon while Perreyra and Schembri added two more before the break. Anton Maglica completed the rout four minutes from the end.

The heavy loss also signalled the end of Costas Kaiafas tenure at Ermis, becoming the fifth coach so far this season to be sacked.

It was not the best of starts for Anorthosis’ new Dutch coach Jurgen Streppel as his team could only manage a draw against Enosis in Paralimni.

Enosis opened the score in the 19th minute through Oudozi and had the chances to make sure of the three points but poor finishing kept Anorthosis in the game and they managed to salvage a point when striker Michal Ďuriš finally got off the mark with his first goal of the season.

AEK took the three points against an impressive Doxa Katokopias with three goals in the final 15 minutes.
It was a cruel result for Doxa who more than matched their more illustrious opponents for most of the game.

AEK took the lead after they were awarded a soft penalty after Giannou was adjudged to have been tripped in the penalty area. Larena converted with Tete doubling the score five minutes later and Hefel hitting a third with almost the last touch.

Nea Salamina scored an important 1-0 win over Omonia thanks to a first*half header by Kingsley Onuegbu.

Kingsley headed past goalkeeper Tomas Mejias in the 20th minute and could have given his side a two-goal cushion shortly before the break but failed with a simple tap-in.

Omonia poured forward in the second half looking for the equaliser but poor finishing and an excellent Veselofski in Salamina’s goal kept them at bay.

In the dying seconds of the game Omonia could have snatched a point but Christophi was unable yet again to beat Veselofski from the penalty spot.

Omonia players were booed off the field after their third consecutive loss raising doubts on the future of their Spanish coach Juan Carlos Oliva.