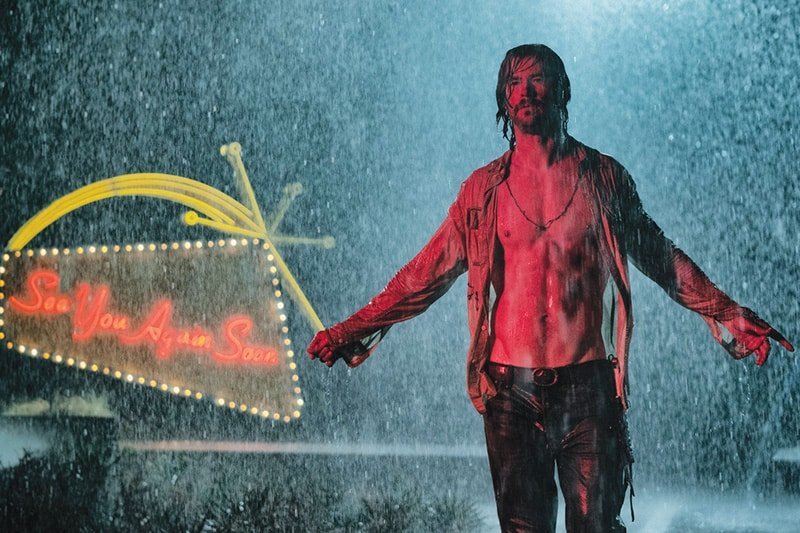 You may know Drew Goddard from his directorial debut back in 2012 – the deliciously meta comedy-horror A Cabin in the Woods. He hasn’t directed a feature film since then (until now) but he has been making splashes on the small screen as the creator of Netflix’s Daredevil, and has penned box-office heavyweights The Martian and World War Z. Even if you’ve never heard the name before (and he’s far from a household name), what this small sample from his resume reveals is that by watching his stuff, you may just have a blast. That’s what Bad Times at the El Royale is ultimately all about; having fun and escaping into an entertaining crime-mystery full of unpredictable twists and spontaneous violence. And having a stellar ensemble cast doesn’t hurt either.

The opening scene is a perfect foreshadowing of the kind of film this will be. A man walks into a dimly lit 1960s hotel room, clearly paranoid about something. In a stylishly edited montage he hides something under the floorboards and goes back to waiting. Finally, a knock comes at the door (the knock he’s been expecting all this time?. He turns his back to the visitor after waving him inside and BOOM, gets violently shot dead. Goddard has been around long enough to know how to grab audience attention, using music, editing and a show-don’t-tell kind of action to build suspense and end it with a knee-jerk ‘bet ya didn’t see that coming!’ moment. Bad Times at the El Royale milks these techniques throughout its two hour plus running time.

The story takes place ten years after the opening incident, when four guests – strangers – find themselves at the El Royale hotel. Father Flynn (Jeff Bridges) is a priest who seems a bit lost, Darlene (Cynthia Erivo) is a singer stopping over on her way to Reno, Emily (Dakota Johnson) is an enigmatic woman who hates small talk and Laramie Seymour Sullivan (Jon Hamm) is a vacuum cleaner salesman who adores small talk – especially the kind that lets him fit in the word ‘accoutrement’. As soon as the hotel’s bellhop – and, apparently, sole employee – Miles (Lewis Pullman) shows up, things start feeling a bit off. Some of the guests weirdly demand specific rooms, some want to see the map of the hotel, while others refuse to write their name in the register.

A single revelation about Chris Hemsworth’s character feels like treading in grossly spoiler-ish territory. Suffice it to say that Hemsworth plays one of the most memorable parts in the film and he does so brilliantly, completely stripping away his Thor persona. The acting is a great place to start when discussing Bad Times. Everyone – barring Erivo, who makes up for it with her spine-tingling singing voice – is on absolute fire here; Jeff Bridges owns one scene in particular with so much pathos and humility, that it’s almost transcendental and easily the greatest piece of acting that’s ever graced a picture with Drew Goddard’s name attached to it.

Paranoia, violent crimes, voyeurism, surveillance, drug addiction, the Vietnam War, cults, family values; Bad Times touches on all of these concepts, and more. It’s such a hodgepodge that none of these motifs fully develop into themes, but because it is so clearly having fun subverting genre conventions, you have a hard time faulting it for that. Goddard finds a way to do just enough to keep engagement high and make the running time breeze by without actually saying anything truly substantial. Thanks to how much of their true selves they hide throughout the course of the film, most of the characters feel fleshed-out and three-dimensional but ultimately we know so little about them. The script is tight, and supported by some amusing non-linear structuring, but I can’t for the life of me remember a single quotable line. The El Royale hotel is a character in itself, what with being split between California and Nevada, and having its own deceptive nature – but how much of that is intelligent metaphor and how much is cheap gimmick?

Goddard is clearly having a blast with his cast and his story. With the way he uses violence, non-linear storytelling and music (the soundtrack is filled with loveable 60s bubblegum rock), some could even call him a poor man’s Quentin Tarantino. With the help of a fantastic cast, the writer-director’s nerdy love of cinematic trickery and highly acute knowledge of genre shines through and ultimately wins the day. It may be a short-lived win and get completely forgotten in a week, and it certainly won’t be winning any Oscars, but for a brief moment in time I spent two hours at the movies and got thoroughly entertained.