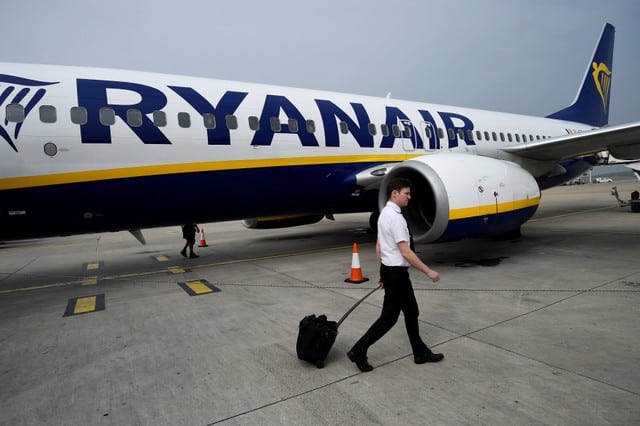 Ryanair said on Monday it hopes to conclude its remaining labour issues by Christmas, signalling a possible end to damaging flight disruptions which have dragged on its shares.

The Irish low-cost carrier, Europe’s largest, also said it may have to cut its capacity further this winter due to high oil costs and intense competition, although these factors were helping it to resolve its difficult industrial relations.

“Given the adverse environment that’s out there for airlines and the number of job losses being reported in recent weeks both by pilots and cabin crew, there is a much more sensible, common sense approach being taken by the unions,” Chief Executive Michael O’Leary said in a video presentation.

Ryanair shares rose by 3.7 percent at 0755 GMT, despite it reporting a 7 percent fall in profit during its key April-September season due to high fuel costs, excess capacity and damage to bookings caused by a wave of strikes.

That was better than the 9 percent fall forecast by a poll of analysts in the wake of an Oct. 1 profit warning.

Over-capacity is likely to continue to weigh on average fares in the winter unless there is a major failure of a rival, but the failure of several small airlines in recent weeks is concentrating the minds of staff, O’Leary said.

Ryanair only needs to secure agreement with two major unions, in Belgium and Germany and is “hopeful of concluding agreements with them this side of Christmas”, he added.

The airline, which has in the past threatened cuts to growth during negotiations with unions, has struggled with labour relations since it bowed to pressure to recognise trade unions for the first time last December.

Ryanair cut its forecast for full-year profit by 12 percent three weeks ago and warned that worse may follow if a recent wave of pilot and cabin crew strikes across Europe continue to hit traffic and bookings.

Increases in the oil price or further falls in fares could force Ryanair to add to the 1 percent cut in capacity announced alongside a profit warning on Oct. 1.

“If oil remains at or above $85 a barrel and fares are under pressure then it would probably be the sensible thing to do to take a look at capacity,” Chief Financial Officer Neil Sorohan said.

That would be a 17-24 percent fall from the record 1.45 billion euro post-tax profit in its most recent financial year.

A poll of more than 10 analysts by Ryanair before the results found an average forecast of 1.127 billion euros for the full year and 1.175 billion for the six months to Sept. 30.

Get into the water to help local charities