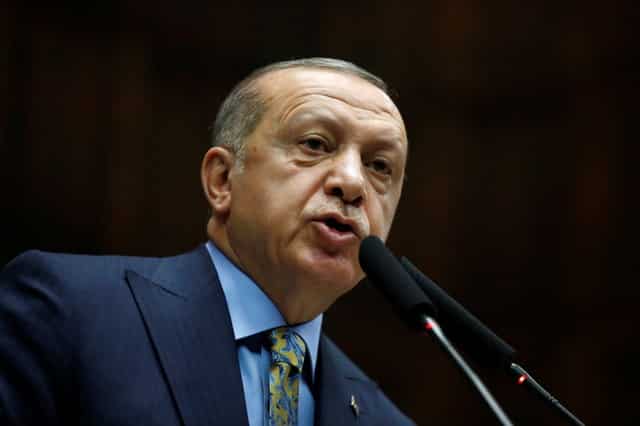 Turkey‘s president on Tuesday dismissed Saudi Arabia’s efforts to blame the killing of a prominent journalist on rogue operatives, calling it a planned, “savage killing”, and demanded Riyadh punish those responsible, no matter how highly placed.

Erdogan said the person who orchestrated the killing must “be brought to account”. The comments were his most explicit yet in a case that has sparked global outrage.

Turkish officials suspect Khashoggi, a US resident and critic of the crown prince, was killed and dismembered inside the consulate by Saudi agents on Oct 2. Turkish sources say authorities have an audio recording purportedly documenting the killing. Erdogan made no reference to any audio recording.

“Intelligence and security institutions have evidence showing the murder was planned,” Erdogan told members of his AK Party in parliament.

“Pinning such a case on some security and intelligence members will not satisfy us or the international community,” he said.

“The Saudi administration has taken an important step by admitting to the murder. From now on, we expect them to uncover all those responsible for this matter from top to bottom and make them face the necessary punishments,” Erdogan added.

Riyadh initially denied knowledge of Khashoggi’s fate before saying he was killed in a fight in the consulate, a reaction that has met with scepticism by several Western governments, straining their relations with the world’s biggest oil exporter.

The kingdom has since changed parts of its official narrative about the killing, further deepening international concern. A host of Western executives and governments have pulled out of a high-profile Saudi investment summit that started on Tuesday.

A Saudi cabinet meeting chaired by King Salman said Riyadh would hold to account those responsible for the killing and those who failed in their duties, whoever they were.

Turkish investigators, meanwhile, searched a Saudi consulate vehicle in Istanbul that contained two suitcases and other items, according to broadcaster CNN Turk. It was not clear whether the suitcases contained any of Khashoggi’s belongings.

The foreign ministers of the Group of Seven (G7) nations called for a thorough and credible investigation, saying Saudi Arabia must ensure such an incident could never happen again.

US President Donald Trump will ultimately decide whether to impose sanctions on Saudi Arabia once all the facts were available “based on the values of the American people and our vital national interests,” Vice President Mike Pence said at an event hosted by The Washington Post.

Erdogan said the killing was planned from when the 59-year-old Khashoggi first went to the Saudi consulate in Istanbul on Sept. 28 to obtain documents necessary for his marriage. He was told he would need to come back later to collect the documents.

On Oct. 1, a day before Khashoggi’s death, agents arrived from overseas and began to scout locations, including the Belgrad Forest near Istanbul and the city of Yalova to its south, Erdogan said. Police have searched both areas for evidence of Khashoggi’s remains, Reuters has reported.

On the day Khashoggi arrived for his appointment and was later killed, the hard disk in the consulate’s camera system was removed, Erdogan said.

“Covering up a savage murder like this will only hurt the human conscience. We expect the same sensitivity from all parties, primarily the Saudi Arabian leadership.”

“We have strong signs that the murder was the result of a planned operation, not a spontaneous development.”

On the day of the killing, 15 people came to the consulate, including security, intelligence and forensic experts, Erdogan said. Consulate personnel were given the day off.

“Why did these 15 people meet in Istanbul on the day of the murder? We are seeking answers to this. Who are these people receiving orders from?” Erdogan said. He added he wanted Saudi Arabia to send the suspects to Turkey for trial.

The White House and the State Department did not immediately respond to a request for comment on Erdogan’s remarks.

Trump has played down any suggestion that the crown prince was involved in the killing but has also warned of possible economic sanctions. Trump has also repeatedly highlighted the kingdom’s importance as a US ally and called Prince Mohammed a strong and passionate leader.

King Salman, 82, has handed the day-to-day running of Saudi Arabia to the 33-year-old prince.

Trump spoke with Prince Mohammed on Sunday. He told reporters on Monday that he had teams in Saudi Arabia and Turkey working on the case and would know more about it after they returned to Washington on Monday night or Tuesday.

CIA Director Gina Haspel was travelling to Turkey on Monday to work on the Khashoggi investigation, two sources familiar with the matter told Reuters.

On Saturday, Saudi state media said King Salman had fired five officials over the killing, including Saud al-Qahtani, a top aide who ran social media for Prince Mohammed. Riyadh is also working with Turkey on a joint investigation

Erdogan spoke as hundreds of bankers and company executives gathered in Riyadh for the Future Investment Initiative, an annual event designed to attract foreign capital under reforms designed to end Saudi dependence on oil exports.

Mitsotakis: Ukraine is not the only country in post-war Europe to have been attacked