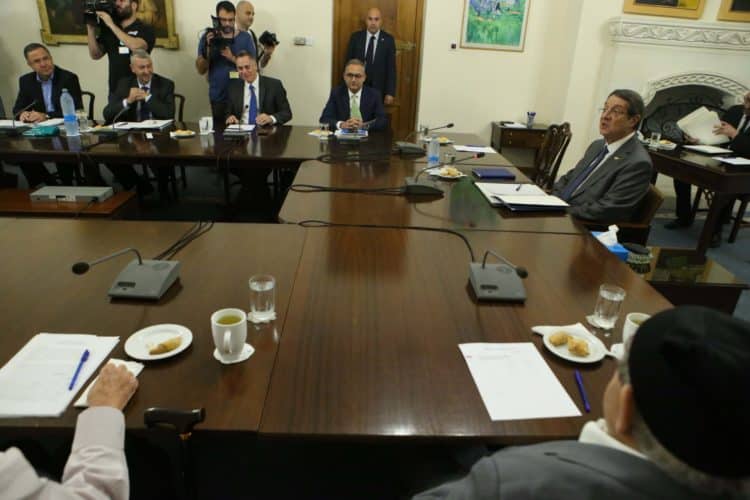 Despite expectations, President Nicos Anastasiades did not table a detailed proposal on ‘loose’ federation as form of settling the island’s division at the national council and he did not give clear answers on the essence of the matter, main opposition AKEL leader Andros Kyprianou said on Tuesday.

It had been widely expected that Anastasiades would be clarifying his suggestion to reflect on the possibility of having a decentralised federal system as a form of administration post-solution, a departure from the Greek Cypriot side’s long-standing positions supporting a strong federal government.

Government spokesman Prodromos Prodromou said there had been a misunderstanding since there was no plan to table a proposal as such, but to have discussion and reflection.

He said the aim was to discuss the potential of reinforcing the functionality of the sought settlement through devolution but there was no question of submitting a comprehensive proposal.

Speaking after the national council meeting, Kyprianou said the president submitted various documents but in no way were they a proposal.

The documents concerned the divergences achieved regarding the powers of the central government during the talks.

“There is confusion about what exactly the president means and we want to hear his specific proposal so as to know what he is really saying,” Kyprianou said. “We haven’t heard a specific proposal from the president. We asked but got no response in my view, and as regards the substance, we got no response about which powers he wants to grant the constituent entities.”

Kyprianou said there could be no discussion without knowing what Anastasiades was proposing exactly.

He criticised the president whose tactic, at best, “departed from the substance in the sense that it distances us from the demands of the (UN) secretary general.”

At worst, it would give the Turkish side the right to demand powers which potentially lead either to confederation or two separate states, “and this would never be accepted as far as we are concerned.”

DISY chief Averof Neophytou said that during the four-hour session he made it clear that efforts to restart the talks should continue “inside the parameters of the (UN) Security Council decisions.”

DIKO demanded a full explanation on the meaning of the term, arguing that its introduction has raised serious questions and deep concerns.

In a memo submitted to the national council, the party said it wanted to know what authorities will be granted to the constituent states and how would disputes be resolved.

Was the full withdrawal of the Turkish army provided for by the ‘loose federation’ or would it be up to the Turkish Cypriot state to decide, DIKO asked.

The government spokesman said there was no magic formula and it wasn’t a matter of arithmetic.

“Indicatively, I should mention, the federal bodies in the central state will be more than 100,” he said, adding that if the Turkish Cypriot side must give a positive vote, then there will be an issue of rigidity.

“This is a concern.”

Asked what Anastasiades would tell Akinci if he asked during their meeting on Friday, Prodromou said he hoped the Turkish Cypriot leader was prepared to talk Cyprus problem.

“The president will discuss freely and has every good intention to discuss anything, but he will make sure he finds out if the Turkish Cypriot side is ready to resume the negotiations with the Guterres framework. This is the critical issue of the talks.”

Prodromou said the reason for the stalemate was the Turkish side’s refusal to seriously discuss guarantees and occupying forces.

Infantino plans for new global tournaments back on FIFA agenda