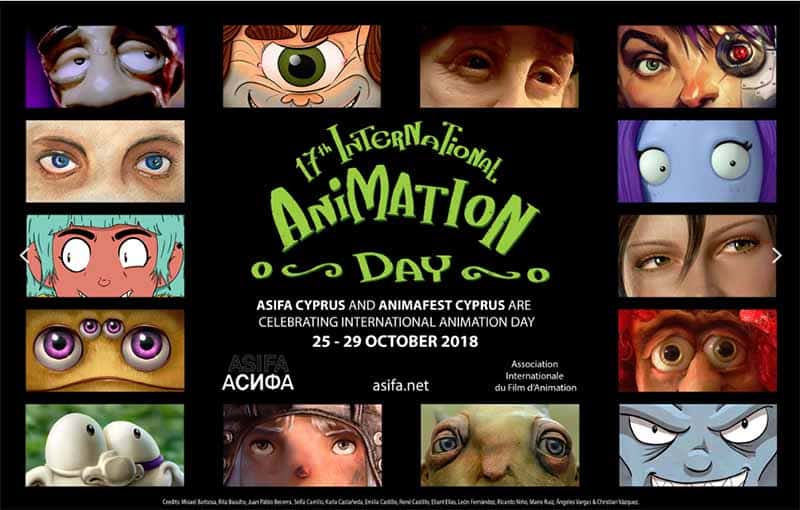 Animation in all its guises will be brought to the screen for five days this week with The International Animated Film Association of Cyprus (ASIFA Cyprus) and Animafest Cyprus celebrating International Animation Day for the seventh year with events taking place from Thursday to Monday in Nicosia, Larnaca and Limassol.

The celebrations will include a variety of film screenings of independent animation as well as discussion panels on the art of animation.

The festival started in 2002 in a village in Cyprus and was initially called Small Documentary Festival. It was later renamed Countryside Animafest Cyprus, and the festival’s focus on the countryside continues today even though audiences have grown significantly in recent years as the festival has moved to a variety of locations to accommodate the larger number of people who have shown interest in animated films.

The aim of Animafest Cyprus is to cultivate the art of animation by raising audience awareness and promoting cultural, financial and social development in the field of independent animation filmmaking. Alongside the festival, the organisers focus on providing expert seminars and workshops, academic forums and special screenings.

The festival is supported by the ministry of education and showcases a selection of the world’s latest productions, focusing on independent, non-commercial films that show acute artistic sensibility, story and execution.

And it is not just adult audiences that are catered to as Animafest has a programme devoted to children’s animation through their short film competition, which features films that have been made by both professionals and final year students. Films are judged on several criteria: originality, storyline, visual design and execution. Organisers say they welcome a variety of animation techniques, as long as the film does not exceed 40 minutes in length.

Animafest also offers a ‘National’ competition in an attempt to support homegrown productions. All Cypriot directors are entitled to submit their work, whether they live and work in Cyprus or not. The only prerequisite is that the films should include at least 50% of their dialogue in Greek and that submissions should include at least three Cypriot contributors in the main credits.

The event will kick off on Thursday with a showcase of selected short animated Cypriot films followed by brief presentations from their creators and will end with a ‘Q&A’ session.

The second screening, starting at 7:30pm and ending at 9pm is entitled Expanding Animation and is a tribute to contemporary filmmakers who work on the edge of cinema and beyond while the animation world was, and often still is, not accepting their work as animated films. With this programme, organisers invite people to look beyond and find superb films they maybe never thought existed.

Animafest
Animated film festival. Kicks off on Thursday October 25 at the Cine Studio in the University of Nicosia, from 5pm-7:30pm. For a full list of the programme and the events in the other cities (Limassol and Larnaca), visit: http://www.animafest.com.cy/en/ Free entrance to all events