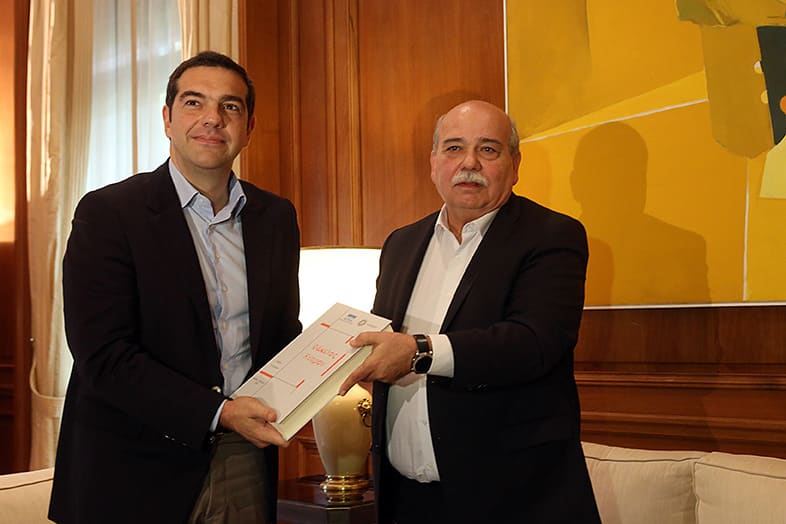 The first four volumes of the Cyprus File were handed over to Greece`s President Prokopis Pavlopoulos and Prime Minister Alexis Tsipras on Wednesday.

The Cyprus File contains the findings of a Greek parliamentary enquiry into the events of 1974 in Cyprus, including both the coup d’état and the Turkish Invasion that followed.

“The publication of the contents of the Cyprus File satisfies the universal request of the citizens of Greece and Cyprus, but also of the political world of the two countries, for immediate and unhindered access to historical truth,” said an announcement by the Greek parliament.

“It ties the political and ethical loose ends regarding what was tragically done in Cyprus in 1974: the coup and the Turkish invasion, which caused a new severe national catastrophe, whose painful consequences Cyprus continues to experience today.”

Compiling the files, consisting of official and the accounts of 81 eyewitnesses, was completed in October 1988, and will be made available on Wednesday after a 30-year wait.

The first four volumes out of the total 33 are 600 pages each and consist of the findings of the Greek and Cypriot parliament as well as the testimonies of the first eleven witnesses.

The volumes were handed over by the Greek parliament’s speaker Nikos Voutsis, at the Presidential Palace at 12:00 and the Maximus Mansion half an hour later.

Voutsis praised the important work made by the Greek scientific committee, which processed and edited the volumes.
He highlighted the importance of the publication for the restοration of historic memory, adding that he hoped it would give an impetus for the retrieval and gathering of all archival documents regarding the Cyprus tragedy.
Pavlopoulos congratulated the Greek and Cyprus parliaments for their initiative, stressing that historical knowledge is necessary in order to understand and process a national “trauma”, which in the case of Cyprus remains unhealed.

“The public should be given access to all documents regarding misguided operations over national matters” he said, so that people can assess the historical responsibilities of those who acted as their leaders.
Greek Prime Minister Alexis Tsipras, said that, with this publication, the Cyprus File is no longer the “black box” of Greek history.

The first four volumes will also be delivered by House President Demetris Syllouris to President Nikos Anastasiades and to party leaders on November 1.

The volumes, all in the Greek language, have been uploaded onto the website of the Greek parliament and can be accessed openly.

Animation in all its forms