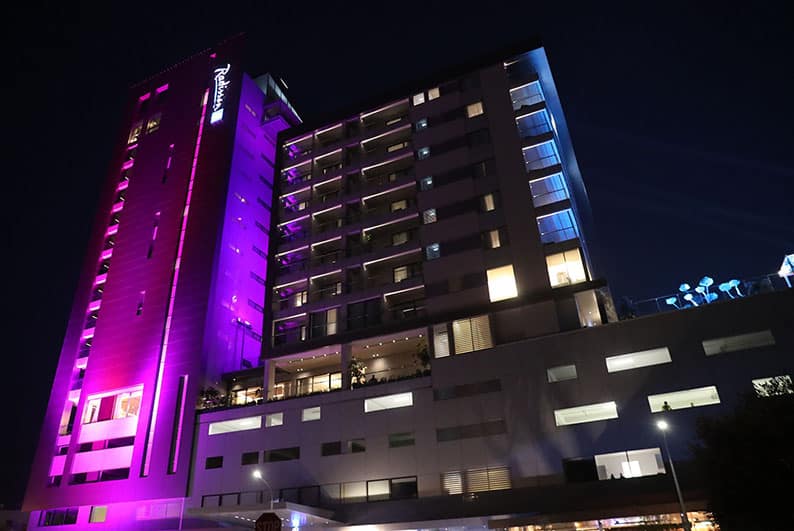 Radisson Blu Hotel and Q-Βlu Plaza shopping centre has reshaped and added a new identity to the Larnaca port area, President Nicos Anastasiades said on Wednesday at the inauguration of the hotel.

Anastasiades said that this “grand development project” has brought tax revenues to Larnaca and the state while also supporting the local community by creating hundreds of new jobs both during the construction phase and now during its operation.

He said that Quality Group, a leading investment and land development company in Cyprus, joined forces with Radisson Blu Hotel Group, one of the largest hotel companies in the world to deliver a landmark hotel to Larnaca.

With a distinct architectural design these developments “reshape the city’s port area, adding new breath, form and identity to the area”.

The completion of the project in question, he said, will reinforce government and Larnaca municipal policy to develop the city through a series of projects co-funded by the government and the EU.

These include the removal of petrol and gas storage facilities from the city’s sea front, the expansion of the Larnaca general hospital, the construction of a traditional municipal market, the redevelopment of the municipal garden and the creation of university schools.

“I want to promise that, by the end of my term, Larnaca will have the look you all have been dreaming of,” Anastasiades said.

As regards the redevelopment of the port and marina, Anastasiades said that the competent ministry is currently awaiting the final offer by the remaining interested suitor, which will be assessed.

Strategically positioned beside the port and 10 minutes from the Larnaca airport, Radisson Blu hotel was created to cater to the needs of professionals. The hotel comprises 106 spacious rooms with sea views, 56 square-metre suites, gyms, a sauna, an outside pool with a bar, all-day restaurant, a lounge bar and a sky bar at the highest point in Larnaca. There are also specially designed meeting areas and conference rooms with state-of-the-art equipment and a capacity of up to 300 people.

Adjoining the hotel, the QBlu Plaza caters to the needs of Radisson Blu Hotel guests and locals. It hosts shops, a spa, cafes and restaurants. Its common areas can host events, such as corporate and commercial presentations, specialised exhibitions, press conferences, fashion shows, cocktail parties, concerts and live performances.

Lloris sent off as Spurs stunned by late equaliser at PSV