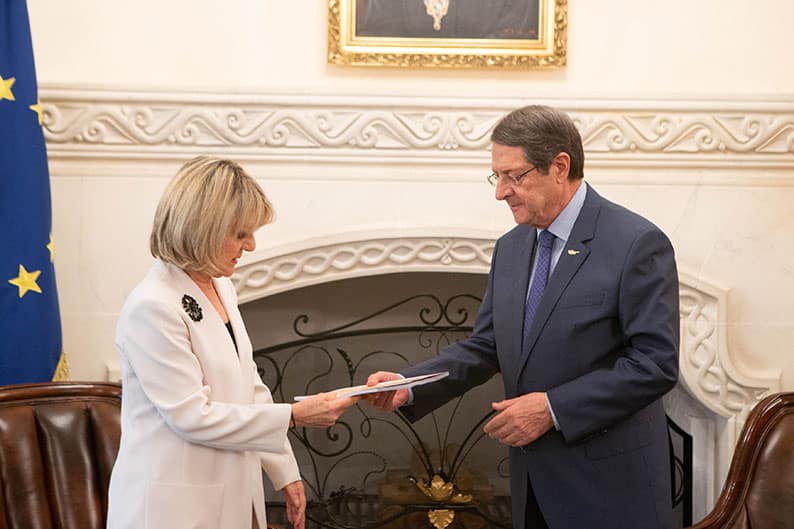 She was presenting her 2017 annual report to President, Nicos Anastasiades. According to Koursoumba, her office received 531 new complaints last year, a 10.5 per cent increase since 2016.

The majority of these complaints concerned education related issues, followed by family matters, state allowances and violence.  Koursoumba said that the increasing complaints were a proof of society’s trust in the institution.

The report Koursoumba said, records the work of her office but also “a vision for the transformation of society into a child-centred one.”

In her note on the occasion of the delivery of the annual report, Koursoumba noted the significant changes that have been made in 2017 in the field of education, in the context of establishing a more child-centered perspective. These include, amongst others, the regulations governing the operation of primary schools, school boards, the law regulating the establishment and operation of private schools and regulations for private institutes.

On what still needs to be done, the commissioner said that schools do not have institutionalised, clear and child-friendly complaint procedures when children feel that their rights are being violated.

With regard to the rights of children with disabilities, Koursoumba said, among other things, that it was necessary to make changes in the administrative practice applied by the special education district committees, so as to provide parents with reports detailing and substantiating the findings of their child’s assessments.

She also said that it is the responsibility of the state to create standards and conditions so that pupils with disabilities have access to education on an equal footing with any other child. She also suggested that the education ministry sets up a committee of independent experts to evaluate the existing education system for children with disabilities.

In an intervention to the education minister, Koursoumba said she had also asked for the establishment of employment terms for school escorts for children in need of support. At the moment, the minimum requirement is a high-school diploma. Parents have been complaining that most escorts are not even qualified to do the job properly.

The commissioner also said that authorities, “either by their actions or inaction”, continue to contribute to the further victimisation of children of troubled families and thus, constantly violating their rights.

She welcomed the fact that the ministry of justice is promoting the institutionalisation of mediation as a tool for resolving disputes concerning family matters, but expressed her regret that the relevant bill, she had drafted herself, was still pending before the House legal affairs committee.

Anastasiades said that the government is taking measures to be more responsive to the needs that arise and that he fully supports the commissioner’s office.

Suggestions were welcome, he said, “to improve practices that, to-date, did not match what the state ought to deliver.”