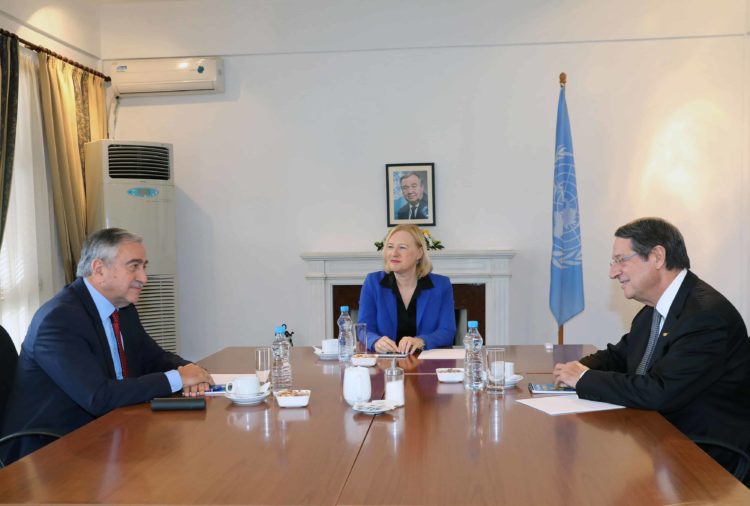 The leaders of the island’s divided communities agreed on Friday to open two new crossings next month, it was announced following a meeting in Nicosia.

President Nicos Anastasiades and Turkish Cypriot leader Mustafa Akinci agreed to open the crossings at Dherynia and Lefka on November 12, according to a joint statement.

The two leaders “also had a frank exchange of views on the way forward. They confirmed their readiness to engage constructively with Ms Jane Holl Lute, who will be visiting the island on 31 October 2018,” the statement added.

The two leaders were hosted by Deputy Special Adviser to the Secretary-General on Cyprus Elizabeth Spehar at the Chief of Mission Residence in the United Nations Protected Area.

The latest round of UN-sponsored peace talks held in July 2017 at the Swiss resort of Crans-Montana ended inconclusively.

After his return from Friday’s meeting, Anastasiades said they could meet again on November 12 if there is progress on issues relating to mobile telephony interoperability.

The opening of the Dherynia and Lefka crossings as well as the connection of the two side’s mobile telephony systems, among other confidence-building measures (CBM), had been decided by the two leaders back in 2015.

Work on the crossings has recently been completed after more than three years but there had not been any concrete progress on the phone issue.

Anastasiades said The Turkish Cypriot leader had informed him that finding a solution would be possible.

“If this is the case then one more CBM would be realised, possibly giving us the opportunity to have one more meeting,” he told reporters.

The president said it was a very creative meeting in the sense that the two leaders exchanged views freely.

“There is common will for peace, stability, cooperation on the basis of everything discussed up until today,” he said. “We are both waiting for Ms Lute and the proposals she would possibly table to facilitate the resumption of dialogue.”

The president said he reaffirmed that the intended solution was of a bizonal, bicommunal federation, provided it generated a functional state.

During the meeting, Anastasiades explained his position of devolution in a bid to achieve a functional, lasting solution that will create a state which will be fully in line with everything the EU requires.

“Concerns that may lead one or the other community to reject a solution if there is no effective way of tackling them,” he added.

Akinci returned from the meeting expressing his satisfaction over the opening of the crossings and because they discussed the island’s future “and this is good”.

The Turkish Cypriot leader said Anastasiades told him he was not thinking outside the UN parameters nor beyond a bizonal, bicommunal federal solution.

Akinci said what was important was to ascertain whether devolution limited the Turkish Cypriot say in a federal partnership, adding that decision-making necessitated both sides’ participation.

“What is important is how these decisions will be taken no matter how wide or limited the powers are,” he said. “Will the decisions be made with a simple majority? If so, then you cannot call this a federation, a partnership? You can call it a unitary state and we don’t want a unitary state.”

Akinci said the goal was a federal structure with politically equal parties and that was why one positive vote from each side is needed.