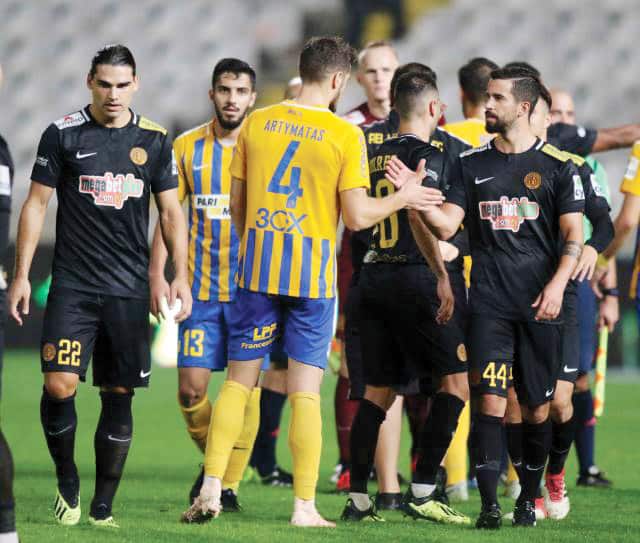 AEL who dropped their first points in the league last week away to Apoel, are expected to return to winning ways against first division newcomers Enosis Neon Paralimni

League leaders AEL host Enosis in round seven of the Cyprus football championship, while Omonia entertain bottom of the table Pafos FC at the GSP stadium.

Alki clash with Apoel while the final weekend game is between Nea Salamina and Ermis Aradippou.

The most intriguing ties of the round will be played on Monday and involve the two teams competing in the Europa League, AEK and Apollon. Both sides face difficult away games to Anorthosis and Doxa Katokopias respectively.

Ael, who dropped their first points in the league last week away to Apoel, are expected to return to winning ways against first division newcomers Enosis Neon Paralimni.

AEL coach Dusan Kerkez is to make one enforced change as Davor Zdravkovski has picked up three yellow cards and will miss the game with Gaztanaga and Marco Adamovic the two candidates to replace him.

Enosis were rather unfortunate not to take all three points against Anorthosis last week with Andre Paous’ side growing in confidence in recent games. Argentinian Gonzalo Zarate’s improved form is a major factor for this and AEL will need to contain him to avoid any unpleasant surprises.

Two teams that began the season with high expectations, Omonia and Pafos FC, meet at the GSP stadium.

Both sides sacked their coaches in recent weeks with Omonia’s technical director Angel Gomez in charge of the side until a new coach is appointed. On the other hand Pafos FC were quick to replace Scotsman Steven Pressley with Croatian coach Zeljko Kopic who will be in charge of the Pafos team for the first time.

Omonia go into this game on the back of three successive defeats that has pushed them well down the table while Pafos FC are in an even worse position having picked up just one point so far and are firmly rooted at the foot of the table.

Alki claimed their first points of the season last week and they will be looking to get something out of their home game against champions Apoel.

Demetris Kyprianou is the only player not available for Alki coach Sakkas while Italian Paolo Tramezzani will be hoping for his first win as Apoel manager at his second attempt.

Apoel are still trying to find their footing under the guidance of the Italian who managed to shore up his team’s porous defence in his first game in charge but will now be looking for more penetration in the final third of the field.

Ermis Aradippou are another team who are looking for a new manager with assistant coach Demetris Daskalakis in charge of the team for their difficult game against much-improved Nea Salamina.

Daskalakis should have Arabadzis, Goulon and Georgiou back in the fold with only the injured Malon not available.

Nea Salamina, currently level on points with Apoel and AEK will be looking to build on their impressive start to the season with manager Savvas Poursaitides having all players at his disposal.

Something for all tastes