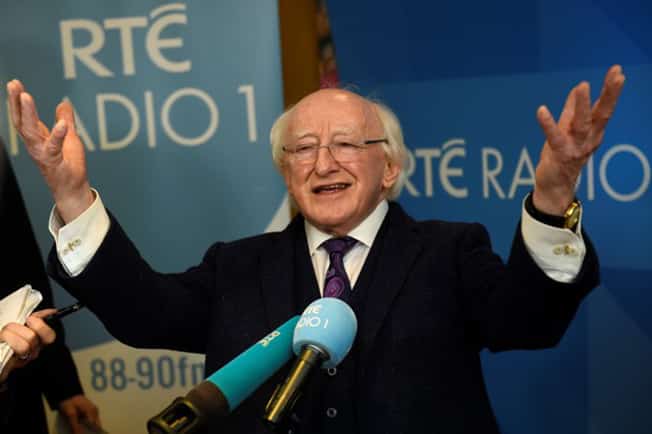 Michael D Higgins is set for a resounding victory after running a popular campaign.

Ireland’s ninth president has campaigned for justice and equality throughout his life.

The 77-year old poet, professor and campaigner said he would only stand for one term – but after much speculation he confirmed in July that he would run again. His campaign for Aras an Uachtarain officially got under way last month.

Born in Limerick in the 1940s, Mr Higgins grew up in Limerick and Clare before he moved to Galway to study at University College Galway.

He began his career as an academic in the 1960s and 1970s, teaching political science and sociology in Ireland and the United States.

He entered the political arena in the late 1960s, joining the Labour Party and served as a senator in the 1980s before representing Galway West in the Dail from 1987 to 2011.

A fluent Irish speaker, Mr Higgins served as minister for Arts, Culture and the Gaeltacht in the 1990s.

He is also a published poet and has presented TV documentaries.

The long-time campaigner for equality was was elected president in 2011 after running as a Labour party candidate.

He secured 701,101 first preference votes which amounted to 39.6% of the vote. In total, he secured one million votes.

When his 2011 resounding victory was formally announced in Dublin Castle, he said he would be a President for all the people and he vowed to lead the country in a necessary transformation away from values based on wealth.

He also said he would attempt to help heal the wounds of the Troubles like his predecessors Mary Robinson and Mary McAleese.

Mr Higgins’ success, secured after transfers from four counts, was the largest total in an Irish presidential election.

His win came after one of the most remarkable political comebacks ever. He seized an unprecedented 15% swing in support following the spectacular implosion of his biggest rival, independent Sean Gallagher, on live television in the final days of the campaign.

Once in office, Mr Higgins resigned from the Labour party, which he had been president of from 2003 until 2011.

He made history in 2014 when he became the first Irish president to undertake an official state visit to the UK.

Earlier this year, he welcomed Pope Francis to Ireland, the first papal visit in almost 40 years.

As the sitting president, Mr Higgins was able to nominate himself as an independent candidate for another seven years in office.

But he also secured the backing of Fine Gael, Fianna Fail and Labour – who agreed not to field candidates from their own parties.

He looks set to spend another seven years at Aras an Uachatarain with his wife Sabina, who he married in 1974. They have four children. His daughter Alice Mary Higgins followed her father into political life and is a representative in Ireland’s lower house.

At the launch of his campaign in September, Mr Higgins encouraged voters to judge him on his values and not his age. He said that people should be judged on their cognitive ability and he said he no longer smoked or drank and has a yoga teacher.

In first, Trump dons masks in visit to a military medical facility