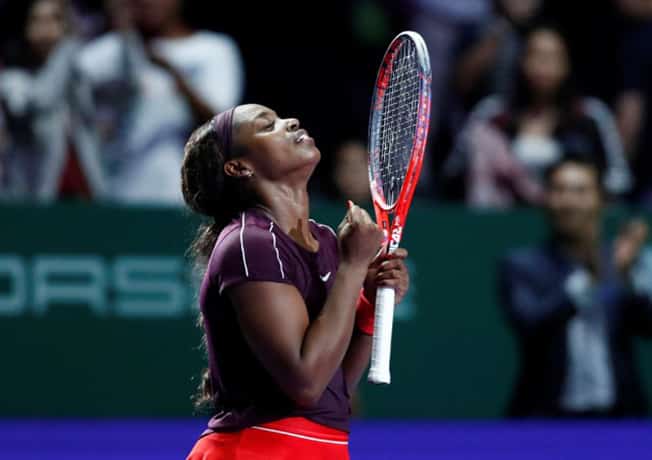 Sloane Stephens and Elina Svitolina enjoyed contrasting three-set victories on Saturday to set up a fascinating WTA Finals title showdown between the only undefeated women at the eight-player season-ending tournament.

Stephens remarkably lost the first eight games of her semi-final against a relentless Karolina Pliskova before the athletic American turned the contest on its head in the second set to emerge with a 0-6 6-4 6-1 triumph over the Czech.

“I came out a little nervous and wasn’t quite feeling the ball and she was absolutely working me in the beginning,” Stephens said in a post-match interview.

“I just tried to stay in it, get as many balls back as I could and am really proud of my fight today.”

In the early match, Ukraine’s Svitolina put on a defensive masterclass to stifle the power of Kiki Bertens with a 7-5 6-7(5) 6-4 victory over the Dutchwoman in a gripping encounter that could have gone either way.

Few could have predicted what was to come when Pliskova started her match full of controlled aggression against an erratic Stephens as the Czech rattled through the opening set in 31 minutes.

Pliskova was equally relentless at the start of the second set, breaking again to register an eighth game in a row before Stephens finally got on the scoreboard, roaring as if she had won the match when she broke back.

Buoyed by the avoidance of total humiliation, Stephens appeared reborn and reeled off five of the next seven games to tie up the match as Pliskova struggled to maintain the pace.

The final set started as a baseline slugfest with both players struggling to hold, until Stephensshowed the kind of scintillating form that carried her to the 2017 U.S. Open title to ease away for a memorable come-from-behind victory.

Svitolina arrived in Singapore out of form yet determined to “silence the haters”, who she said believed she did not deserve to be in the tournament, and the Ukrainian has played brilliantly to win all three pool matches and her semi-final.

“In the end, it was just about running and chasing every ball… the level was very tough, we were both playing such good tennis, I was just happy to close it out,” Svitolina said.

A pumped-up Svitolina made the better start, chasing down every ball to earn an early break but the aggressive Bertens broke back as she began to find her range with a blistering forehand loaded with heavy topspin.

Svitolina had been a virtual spectator during the fightback but shook off her passive play and concentrated on depth as opposed to direction, taking advantage of mental lapses from Bertens to claim the opener when her opponent double-faulted.

A pep talk from coach Raemon Sluiter seemed to help Bertens iron out her unforced errors but the world number nine collapsed completely with the second set at her mercy, failing to convert four opportunities to level the match.

Svitolina just kept the ball in play and rallied from 3-5 down to send the contest into a tiebreaker, which the Dutchwoman edged after rediscovering her poise.

The Ukrainian emerged on top of three consecutive breaks at the start of a tense third set to stake an early lead in the decider and somehow rode the advantage all the way to the finish line, sealing the win with an epic hold in the 10th game.

Stephens leads Svitolina 2-1 in their head-to-head stats, the American enjoying a straight-sets win over the Ukrainian in the last meeting at the Rogers Cup in August.