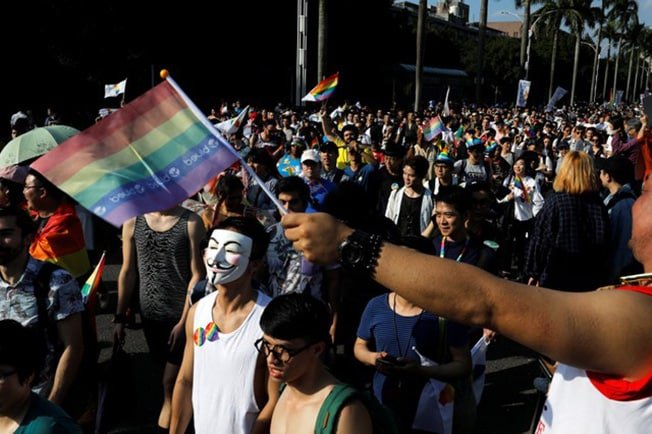 Tens of thousands of people have gathered in Taiwan’s capital for the city’s annual gay pride parade ahead of referendums next month that will determine whether same-sex marriages will be recognised on the island.

In a first for Asia, Taiwan’s Constitutional Court ruled in favour of same-sex marriage in May 2017, punctuating a long campaign by advocates for gay rights in one of the continent’s most liberal democracies.

Authorities were given two years to either enact or amend relevant laws, failing which same-sex couples could have their marriages recognised by submitting a written document.

But little progress has been made towards implementing the court’s ruling.

Meanwhile, gay rights and anti-gay rights campaigners have organised referendums that will take place alongside local elections on November 24.

Organisers estimated that 130,000 people took part in the parade in Taipei, the biggest annual gay pride march in Asia.

Wang Zi, a 35-year-old from Beijing, said he supports Taiwan for being a pioneer in gender equality and same-sex marriage in Asia.

“There should not be boundaries when it comes to love and sex,” Mr Wang said.

“I am supporting this. Although I cannot take part in this [referendum], I will support Taiwan with all my might. Go Taiwan. Go marriage equality.”

Akel calls for probe into ‘coupist’ bragging about 1974 involvement