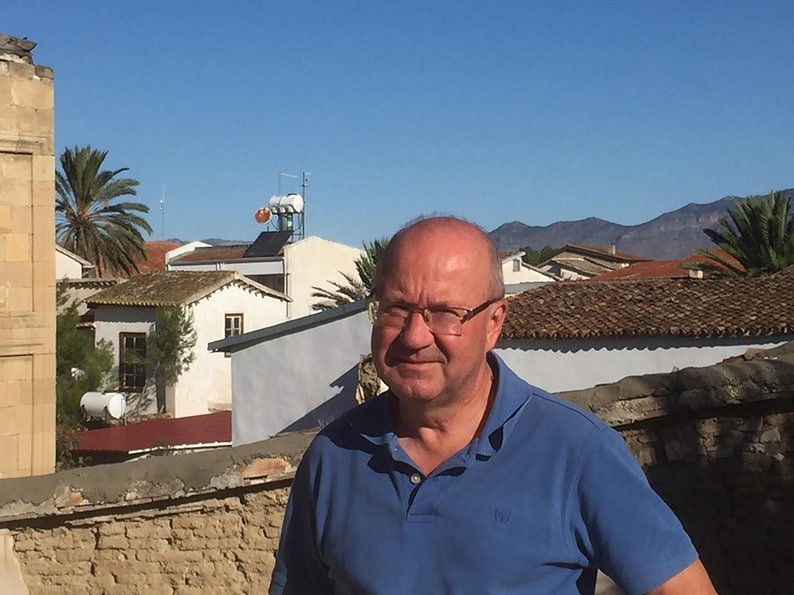 THOSE were the good old days. In May 2015, soon after his election as Turkish Cypriot leader, Mustafa Akinci and Nicos Anastasiades, accompanied by Nicosia’s two mayors, were walking through the streets of the old town.

The leaders’ entourage moved smoothly between the two sides of the divide, stopping for coffee and ekmek kadayif at the Buyuk Han and zivania in Ledra Street.

The two mayors, Constantinos Yiorkadjis and Mehmet Harmanci, happily hosted the walkabout aware that Anastasiades and Akinci would soon embark on the peace negotiations that, at the time, everybody hoped would solve the Cyprus Problem once for all. Both mayors were eager to advance the process towards a successful outcome with their support for the opening of more crossing points in the divided capital.

On the day of that symbolic walkabout, Anastasiades and Akinci left Nicosia’s old town each with a letter in his pocket from his respective mayor.

“I wrote to Mustafa Akinci and my counterpart did likewise to Nicos Anastasiades,” Harmanci recalls as he sits in his office, noting that their letters were almost identical.

“We asked them to open three new crossings in Nicosia – two for pedestrians, one for vehicles: one connecting Paphos Gate with Arabahmet; the second – for cars – connecting north Nicosia’s Caglayan area with Kaimakli and Pallouriotissa, and, for the third, opening up a southern entry at the back of the Bandabuliya covered market like it used to be in the past.”

Days later, the leaders announced a series of confidence building measures (CBMs), including a promise “to work towards opening more crossing points, starting with Lefka and Dherynia.” They also made clear they had “referred a number of other proposed crossing points for further examination to the responsible committee”.

On Friday, Cypriots finally learned that November 12 was set as the inaugural date for the opening of the two crossings first announced more than three years ago. As for the commitment to consider other crossings, almost nothing has been said since the promise made in 2015.

A source in the Turkish Cypriot administration told the Sunday Mail that the two leaders had decided “that until the Lefka and Dherynia crossings were open, there would be no mention of any other crossings.”

“Then, and only then, should the leaders decide they want to open more crossings; they will say so, and then we will get to work on them,” the source said.

The recent flurry of hopes for the now confirmed opening of Dherynia and Lefka led the two mayors to conclude that it was time to renew their efforts on behalf of Nicosia.

Harmanci believes it is imperative they focus anew on the plight of the divided capital. He and his counterpart have to contend with similar problems ranging from traffic congestion to pollution. “We need to work on a joint strategy on how to address these issues,” he said.

“Nicosia was built as a circle, yet because of the division we can’t move around the city in a logical flow. More crossings, especially a vehicle crossing in the Caglayan-Kaimakli-Pallouriotissa area, would make life easier for everybody. It would give people who live in the east of the town a faster and more efficient way of traversing this part of the town. Turkish Cypriots from Caglayan and Kucuk Kaimakli would be able to go shopping in places like the Athienitis supermarket without having to drive through the whole town just to get there. Greek Cypriots from Kaimakli would benefit too, since the new route would mean they could reach the centre much faster,” he explained.

Opening of the Caglayan crossing, Harmanci claims, would also help tackle the growing congestion at the Ayios Dhometios crossing where “torturous” delays are the norm these days as more and more Greek Cypriot motorists cross to shop and buy cheap fuel, taking advantage of the weakened Turkish lira.

The Paphos Gate-Arabahmet crossing is another priority with both mayors fully aware that an additional pedestrian point in old Nicosia would make life a lot easier for people who cross daily between the two sides.

Enver Eronen, a Turkish Cypriot architect living in Arabahmet, agrees. The Ledra Street crossing has become very crowded especially during the tourist season, he told the Sunday Mail. He thinks a new passage would revive the immediate area, just as it did with Ledra Street and Arasta. “Besides, with a crossing in Arabahmet, I could take my two little daughters for a walk in the municipal gardens in the south.”

The Paphos Gate-Arabahmet crossing is a project close to the heart of mayor Yiorkadjis. Caught up in managing the move of his offices to the new municipality building in the heart of the congested old town, he was unable to contribute to this report. However, in his 2015 letter to Anastasiades, the mayor noted that the area is a focal point for five religions (Greek Orthodox, Muslim, Maronite, Armenian Orthodox, and Roman Catholic), and contended that a crossing would transform the area into a “religious promenade” which, if properly developed, “could be a microcosm of multiculturalism and co-existence of the faithful.”

Salpy Eskijian Weiderud, Executive Coordinator of the Office of Religious Track of the Cyprus Peace Process under the auspices of the Swedish embassy, noted how the office has supported the mayors’ request for more crossing points in the walled city, especially in the Paphos Gate area.

“These areas were once a thriving space of coexistence for the different communities of Nicosia,” she said. “With the Latin Catholic Church and the Tophane Mescid’i at one end, the Arabahmet Mosque at the other, with the Maronite Catholic and Armenian Orthodox Churches in between and a Greek Orthodox Church nearby, the area invokes a symbolic axis of what one might call The Religious Walk, which would open up new opportunities for our town.”

Rev Father Jerzy Kraj, Latin Patriarchal Vicar for Cyprus, who is based in the Church of Holy Cross located in the buffer zone next to Paphos Gate, concurs that making a reality of such an ecumenical tour would be a wonderful symbol of the multi-religious identity of the island’s capital.

Not everyone, however, is convinced that old Nicosia is in need of more crossings. A source close to the Greek Cypriot side of the Technical Committee on Crossings suggested to the Sunday Mail that some government officials believe opening the old Aglantzia-Athienou road and the Pyrgos-Pachiammos road, going through the Turkish Cypriot enclave in Kokkina, should have greater priority.

This source contends that opening the old Aglantzia-Athienou road would make it easier for Turkish Cypriots travelling to Larnaca, while the Pyrgos-Pachiammos proposal, if agreed to by the Turkish Cypriot side, would offer immediate benefits to affected communities in the area.

“Just a right of passage for emergency vehicles such as ambulances in time of need would change the life of the Pyrgos community,” the source said.

Cheap flights and low cost carriers – beware what you wish for