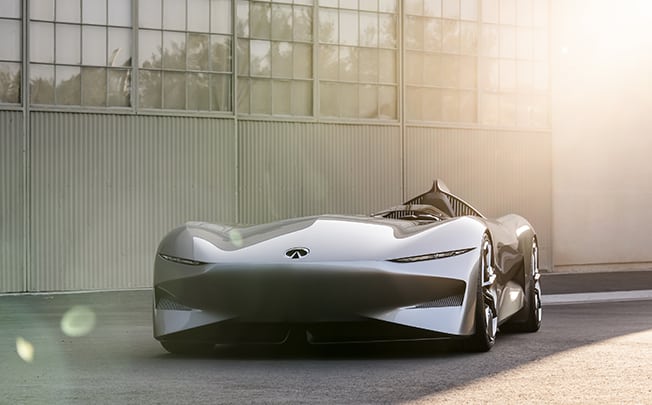 INFINITI says it has ‘looked back to go forward’ with the Prototype 10, which the designers say evokes the spirit of early Californian speedsters

Bridging past and future, the INFINITI Prototype 10 recaptures the spirit of early speedsters for an era of electrified performance.

Revealed for the first time at the 2018 Pebble Beach Concours d’Elegance, the concept represents a physical manifestation of INFINITI’s ambitious plans for electrified performance.

From 2021, every new INFINITI model will be electrified, featuring electric drivetrain technology to enhance performance.
Following the ground-breaking Prototype 9 concept first revealed in 2017 at Pebble Beach, INFINITI says it has ‘looked back to go forward’ with the Prototype 10, which the designers say evokes the spirit of early Californian speedsters.

This is the first project to come to fruition under the direction of Karim Habib, INFINITI’s new Executive Design Director, and is a project spanning the globe: the Prototype 10’s creation has been overseen by INFINITI’s Japan design centre, designed digitally in the UK, and crafted by hand in San Diego, California.

The monoposto (single-seat) cockpit is consistent with INFINITI’s driver-focused approach, and “is indicative of the new opportunities created for INFINITI by adopting electrified powertrains and flexible vehicle platforms”.

The car echoes the layout and design of early speedsters, which included some of the most evocative car designs of all time, where power was celebrated through high-powered single-seat competition cars. “Our new concept speaks of an electrified future, something which is reflected in its form and details. It is appropriate that we found inspiration in an optimistic bygone era in which cars were characterised by the simple love of driving” says Habib.

The new concept follows on from two other design studies revealed by INFINITI in the last 12 months: the Prototype 9 – first revealed in 2017 – and the INFINITI Q Inspiration Concept, unveiled at the 2018 North American International Auto Show in Detroit.
“Where Prototype 9 – a sleek, open-wheeled, electric retro-roadster – imagined an alternative history for INFINITI, the Prototype 10 is resolutely focused on what the future holds for the brand.

“Prototype 10 provides a link between where INFINITI stands now, and where we are heading. For us, electrification means performance – our cars will be powerful, efficient, and highly rewarding to drive, and Prototype 10 is a physical representation of our electrified future,” adds Habib.

So, from 2021, all new INFINITI models will offer a mix of pure electric vehicles and e-POWER vehicles which aim to deliver ‘high performance in the smartest way possible’. By eliminating the need for external charging sources, INFINITI’s e-POWER models will also provide ‘range confidence’ for longer journeys.

The powertrain can instantly deliver 100 per cent of available torque with a push of the accelerator pedal.
A black chin spoiler at the base of the bumper is designed to enhance downforce at the front, and channel air flow beneath the completely flat underfloor of the vehicle.

The cockpit echoes the design philosophy of the exterior, with clean, flowing surfaces bisected by geometric lines. It is inspired by single-seat formula race cars – placing the driver fully in control with an unhindered view of the road ahead, with ready access to ergonomic controls, and with minimal distraction. The uncluttered cockpit is fitted only with a driver’s seat, four-point harness, brake and accelerator pedals, and a ‘highly technical’ race-inspired steering wheel.

The steering wheel is the most visually-arresting element of the cabin, mounted on lightweight carbon fibre struts that extrude out of the bodywork. There is no need for an intrusive steering column due to INFINITI’s steer-by-wire Direct Adaptive Steering, which the makers say provides “lightning-fast responses to steering inputs”. The small-diameter wheel itself adheres to motorsport principles, with a flat lower section and distinct grips for the driver’s hands – and with no gears to change, there are fewer physical distractions.

The single seat has extended side and hip bolsters to provide a snug fit and maximum possible lateral support. The seat is mounted as low in the cockpit as possible to help lower the overall centre of gravity, with only the driver’s head visible above the bodywork (the designers dubbed this aspect of Prototype 10 ‘The Bathtub’ during its creation).

INFINITI says its modular platforms will enable it to apply e-POWER and battery EV powertrains in ‘new and creative ways’ within chassis of all shapes and sizes – including saloons, SUVs and sports cars. Electrification also provides the opportunity to introduce a wider variety of drivetrains, including a new e-AWD system, underpinned by electric motor technology.

Purely a design study at this stage, Prototype 10 nevertheless hints at the inherent flexibility in the approach to platform and powertrain development.