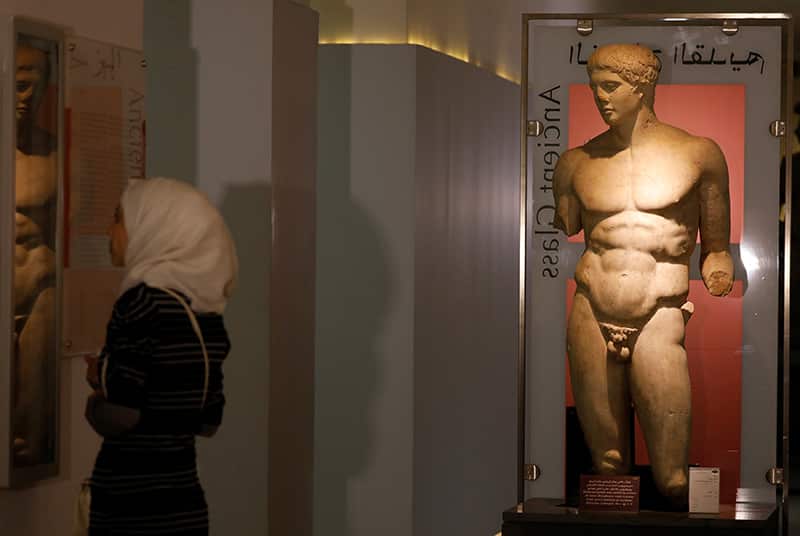 A sculpture is displayed during the reopening of Syria's National Museum

Syria’s National Museum of Damascus opened its rich trove of antiquities to visitors again on Sunday, seven years after war forced them to close and months after the government recaptured all rebel areas near the capital.

Only part of the museum, and its collection drawn from the civilisations that have ruled Syria over the millennia, will be reopened immediately, its deputy director Ahmad Deeb said.

“We will exhibit a group of artefacts from all periods from prehistory, the ancient east and the classical and Islamic eras in this section,” he said.

The reopening is a sign of the government’s attempts to restore normality in the capital after a succession of Russia-backed army victories since 2015 that have ended the threat to President Bashar al-Assad’s rule.

A bloody army offensive this spring forced the rebels to surrender eastern Ghouta in April, and the remaining insurgents enclaves near Damascus capitulated in the following weeks.

The conflict continues, with swathes of the country still outside Assad’s control, but it has stabilised with a Russian-Turkish deal over the last rebel bastion in the northwest, and U.S. backing for Kurdish-led forces in the northeast.

The fate of Syria’s ancient heritage has hung in the balance for much of the conflict, as fighting erupted in major sites such as the Old City of Aleppo and others, including the desert ruins of Palmyra, fell into the hands of iconoclastic jihadists.

As the insurgency began to spread in 2011, the government evacuated the museum’s collection, one of the most important in the Middle East, along with those of provincial museums, hiding their artefacts far from the battlefield.

In Aleppo, where the museum lay near the front line, the huge ancient statues outside were too large to transport, and were boarded up in giant crates filled with cement against shrapnel damage.

“The masterpieces were hidden straight away,” said Deeb. Army trucks carried antiquities from sites across the country to stash in safety, he said. The collection of Deir al-Zor museum, isolated by fighting, was airlifted to Damascus.

In the capital, the empty museum continued to be used by the General Directorate of Antiquities as an office, and was hit by mortar fire, but not badly damaged.

As the rebel presence around Damascus weakened in recent years, some statues were put on display to the public in the museum garden, including the Lion of Elat, a massive piece from Palmyra that was damaged by Islamic State and later restored.

Other objects, recovered by the government after they were seized by insurgents or smuggled overseas, were put on display this month in the Damascus Opera House, a testament to the looting of heritage that has characterised much of the war.

Fulfilment of an exchange agreement