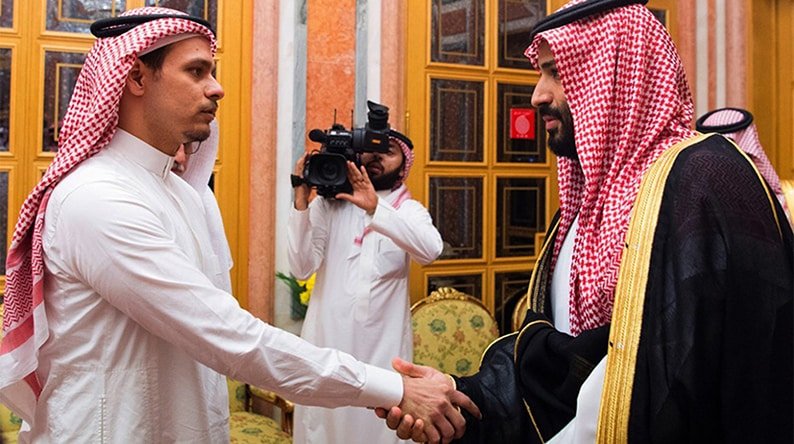 For Salah’s cold stare in light of what happened to his father is so compelling that only a Shakespeare could find the words to match the intensity of such emotions. What must it really feel like to have to shake the hand of a prince with a hand in the murder of one’s father?

The crown prince denies any involvement of course. “The crime was really painful to all Saudis, and I believe it is painful to every human in the world. It is a heinous crime that cannot be justified,” he said at the investment conference that opened in Riyadh last Wednesday.

Of equal significance was his conciliatory tone towards Turkey’s President Recep Tayyip Erdogan. It was as if to say thank you for not going to town with the audio and other evidence that prove this was neither a rogue operation nor an operation gone rogue – the two scenarios being forensically distinct.

President Erdogan’s revelations to the Turkish National Assembly last Tuesday were underwhelming in terms of his earlier promise to reveal the naked truth.

‘I swear by almighty God to tell the truth the whole truth and nothing but the truth’ is what every witness swears before giving evidence on oath.

But the naked truth is not the same as the whole truth. Erdogan made good his claim that this was a state-sponsored, savage murder that was politically motivated but left open the possibility that it might have been an operation that went rogue in the sense that its primary purpose was to abduct Jamal Khashoggi and return him to Saudi Arabia. After all, if it were to kill him, easier ways readily spring to mind.

It is plausible that Jamal Khashoggi resisted, and it is conceivable that it was at that point that the operation went rogue, in which case the Saudi’s claim is not as far-fetched as it seemed at first blush.

Unfortunately such abductions involving rendition and torture are not unusual in the Middle East.

In 2001 a prominent Palestinian businessman and old associate of Yasser Arafat, Jaweed Al-Ghussein, was abducted in Abu Dhabi by government agents whilst attending a wedding and disappeared a few days later.

He had huge business interests in Abu Dhabi but had fallen out with the Palestinian Authority over an alleged loan that was litigated in Abu Dhabi. He won his case after an appeal but the authorities in Palestine and Abu Dhabi did not accept the result.

After his abduction he was taken to a private airport in Abu Dhabi and put on Yasser Arafat’s plane with six armed guards from Fatah and flown to Arish airport in Egypt from where he was driven across the border to Gaza. There, he was kept under house arrest and had to endure torture and cruel and inhuman treatment.

I must declare an interest as I have advised in this case so I can only present the Al-Ghussein family’s side of the story, although most of the evidence is in the public domain. Its relevance here is to illustrate the prevalence of rendition and torture in the region.

There had been collusion between the authorities in Abu Dhabi and rivals of Al-Ghussein in the Palestinian Authority for his abduction and rendition without due process that in the end led to the loss of all his business assets in Abu Dhabi for which his estate has yet to be compensated.

There was extensive coverage in the international media about the case. The Red Crescent was refused access and Amnesty International called for his release. The United Nations Working Group on Arbitrary Detention determined that he was detained unlawfully and appointed a Special Rapporteur on torture.

During his detention in Gaza he was denied necessary medical treatment unless he signed away claims against Abu Dhabi and the Palestinian Authority. He was insulin dependent and had symptoms of cancer.

Torture occurs whenever a person intentionally inflicts severe pain or suffering on another in the performance or purported performance of his official duties anywhere in the world. It is immaterial whether the pain or suffering is physical or mental and whether it is caused by an act or an omission. So withdrawal or failure to provide medical treatment for an extortionate purpose is torture.

Torture is an international crime for which there is a universal jurisdiction to prosecute. Under the 1984 Convention against Torture, state parties must either prosecute or extradite alleged torturers found on their territory.

Universal jurisdiction is the ability of a state to prosecute offenders irrespective of the place of commission of the offences.

Everyone involved in the torture of Al-Ghussain can potentially be prosecuted if they visit UK. Likewise anyone who authorised or took part in the operation that led to the torture and murder of Khashoggi can be prosecuted anywhere in Europe and can be arrested if the evidence of torture is forthcoming from the Turkish authorities.

America and Britain have cancelled the visas of all those arrested in Saudi Arabia, but anyone – whether arrested by the Saudis or not – against whom Turkish prosecutors have evidence of the torture and murder of Khashoggi can be arrested and prosecuted anywhere in Europe.

Which is why it extremely important for the Turkish authorities to share the audio and other evidence that proves Khashoggi was tortured.

The CIA director, Gina Haspel, was in Ankara last week and it would be surprising if she were not shown the evidence. Her purpose was probably to persuade the Turks to reveal the naked truth but not the whole truth.

Foreign policy under Trump is transactional. The Americans are only interested in protecting the billions of dollars-worth of deals they closed with the Saudis. Although they have a bit of a cheek asking for assistance from the Turks – whose economy they sought to wreck only a few weeks ago – international politics requires one to adapt to events as they unfold, and Erdogan has shown time and again that he is a master of adaptation.

The Turks should share the evidence of torture contained in the audio recordings in the Khashoggi case with all the law enforcement agencies in Europe also to make sure the suspects know that it is not just those whom the Saudis arrested who will be prosecuted.

Everyone implicated by the evidence in possession of the Turkish authorities however exalted his status must know that if they come to Britain or Europe they will be arrested and prosecuted for torture.

The law is that if you have tortured anyone, whenever and wherever, you can be prosecuted and punished if you come to Europe at any time.

The dark and amoral circus of politics