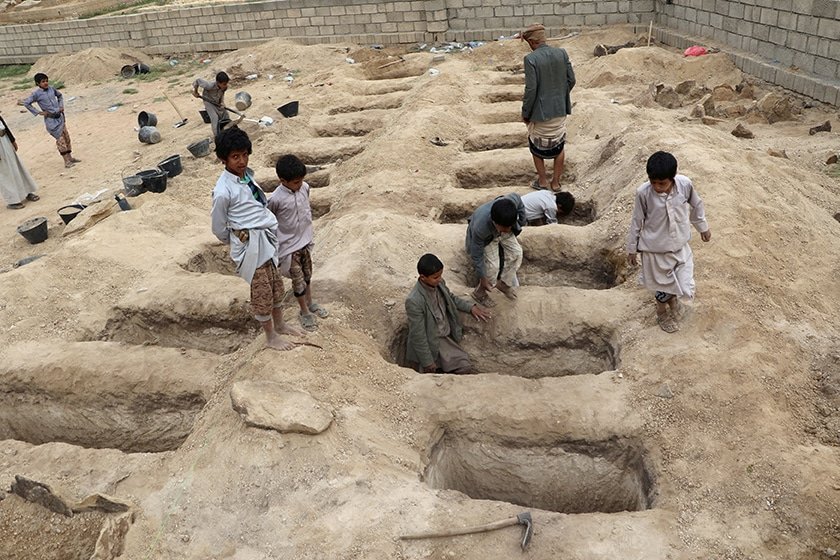 While the west has a collective meltdown over the Khashoggi murder, it has long failed to question a far bigger crime

While Saudi Crown Prince Mohammed bin Salman (MbS) frantically tries to scrub Jamal Khashoggi’s blood off his hands like a Middle Eastern Lady Macbeth – “Here’s the smell of blood still. Not all the sweet perfumes of Arabia will sweeten this hand.” – could we have a word about his war in Yemen too?

In the Saudi consulate in Istanbul two weeks ago, the crown prince’s henchmen murdered one high-profile critic of his rule. In Yemen, on Saudi Arabia’s southern border, his air force and those of his allies have been killing around a hundred men, women and children a week for more than three years now. To little avail, it must be said, but the futility of MbS’ bombing campaign does not excuse it.

When the war in Yemen is discussed in the Western media, two phrases recur constantly. One is the “internationally recognised president”, a phrase meant to suggest that the man in question, Abdrabbuh Mansour Hadi, is somehow the legitimate and even the democratically elected leader of the country.

Hadi has been living in exile in Saudi Arabia for the past three years, with only occasional brief visits to the sliver of territory in southern Yemen still controlled by his supporters. He is currently in the United States for medical treatment.

The other misleading phrase is the “Iranian-backed Houthi rebels”, a formulation meant to suggest that the Houthis, who have controlled most of Yemen for the past three years, are mere pawns of the evil Iranians.

‘Iranian-backed’ is also meant to suggest that the Houthi rebels are actually being supplied with weapons by Iran, an allegation that is used by Arab countries beholden to Saudi Arabia and by MbS’ American and European arms suppliers to justify their support for his war on Yemen. Both phrases are deliberately misleading.

Abdrabbuh Mansour Hadi came to power in Yemen in 2012, when the ‘Arab spring’ revolt that overthrew long-ruling dictator Ali Abdullah Saleh was threatening to topple into civil war. Saleh had always resisted Saudi Arabia’s attempts to control its far poorer Yemeni neighbour, and the Saudis exploited his fall to put their own man, Hadi, into power.

Hadi was ‘elected’ president in 2012, in a vote where nobody else ran, to serve a two-year transitional term while the country sorted out a new constitution. He was effectively overthrown by Houthi tribal militia in 2014, partly because he was a Saudi puppet but mainly because he supported a Saudi scheme to create a federal system that would impoverish the Houthis.

The northern highlands where the Houthis live are the poorest of all Yemen’s regions, but the proposed federal system would have reserved the country’s dwindling oil revenues for the sparsely populated southwestern provinces where the oil actually is.

Were the Saudis deliberately trying to hurt the Houthis, who are Shia and therefore not trusted by Riyadh? That’s certainly how the Houthis saw it, so they rebelled. It had nothing to do with the Iranians.

Iran certainly approves of the Houthi revolt, partly because the Houthis are fellow Shias but mainly because they overthrew a Saudi puppet president. But there is no reason to believe that Iran actively encouraged the revolt – the Houthis understand their own interests quite well – and absolutely no evidence that it has supplied the Houthis with weapons.

It’s just not necessary: Yemen is flooded with weapons, and always has been. Besides, there is no way for Iran to get weapons and supplies in to the Houthis. Yemen is a thousand kilometres from Iran, with Saudi Arabia and its Arab allies in between. Saudi Arabia and its allies control the seas around Yemen and the airspace over it. The whole idea is nonsense.

The Saudis make a great fuss about the missiles that the Houthis occasionally launch at Saudi Arabian targets, in a pathetic retaliation for the intense Saudi air attacks they live under every day. Riyadh claims that the missiles must be Iranian, because the Yemenis are too primitive to handle that technology.

This is more nonsense. The missiles are just upgraded Scuds, a 1950s Soviet design that was sold to half the countries in the Third World. The Yemeni armed forces had them, the Houthis captured them, and Yemeni technicians are perfectly capable of extending their range to reach Riyadh and other Saudi cities. But they have not managed to make them accurate at those ranges: they rarely hit anything.

The Houthis are not an admirable lot, but they are just fighting their corner. There are no Iranians in sight, but Saudi stories about them win American support for MbS’ war. And the Western media almost never question these much bigger lies, although they are having a collective meltdown over the murder of Jamal Khashoggi.

Embrace Disruption: The paradox of change and continuity

The dark and amoral circus of politics