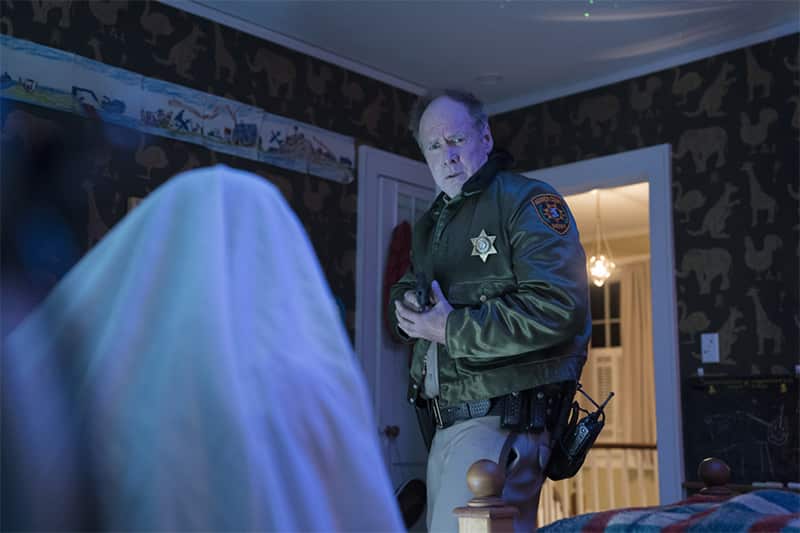 Karen (Judy Greer) has had it up to here with her mother’s fear and paranoia. “The world is not a dark and evil place!” she chides. “It’s full of love and understanding.” Alas, Mum is Laurie Strode (Jamie Lee Curtis) whose friends were butchered by Michael Myers in 1978, so she’s prone to a darker worldview. She never got over that Halloween – as depicted in the original Halloween 40 years ago – and has been an outcast ever since, not to mention a drunkard and a gun-nut. All she does is wait for the day when she can confront her darkest nightmare (“the bogeyman!” she tells a British journalist, who doesn’t believe her), praying for Myers to escape and go on the rampage again, so she can kill him.

That day arrives in the new Halloween, following in the footsteps of six Halloween sequels and Rob Zombie’s 21st-century reboot, not to mention Halloween H20 (1998) where Curtis returned for the 20th anniversary to battle the monster “one last time”. One watches the new version carefully, trying to discern what drew her to the franchise yet again (she’s also among the executive producers, along with John Carpenter who directed the iconic original) – but it’s hard to see any new tweak in this strange movie, a perverse entertainment that keeps raising possible tweaks only to delight in squelching them.

One trendy take is to view it through a #MeToo lens, the story of a traumatised woman who never got over a long-ago assault, and now seeks empowerment – though that reading may be driven more by the fact that this is a Miramax co-production (Harvey Weinstein’s old company) than anything in the movie. A more obvious theme is the question of what makes Michael Myers tick. “Is he emotionally driven?” asks a doctor who’s been studying Myers (a.k.a. ‘The Shape’) for decades. “I want to know what he feels!” This would be a good reason to revisit a 40-year-old classic, to shed some light on its psycho: is there something going on behind the mask – or is he “nothing more than pure evil,” as Dr. Loomis once put it? The film starts on a high, with the British journo holding up the mask and trying to get a rise out of Michael (“Say something! Say something!!!”) – then we smash-cut straight to titles, flooded with Carpenter’s creepy synth theme from 1978. Goosebumps!

Yet the film doesn’t really explore the question of Michael’s feelings, in fact it’s very clear that he has no feelings. He is indeed “pure evil”, an Other, a killing machine. End of story. Halloween is weirdly sadistic, floating the idea of compassion only to throw it back in our face, as if to mock us for being so gullible. It soon reverts to fear and paranoia – Laurie is right, of course – its motto being perhaps the doc’s advice to neighbours huddled around Myers’ latest victim: “I’m a doctor. Lock your doors!”.

There are several deaths in this movie, some of them nicely staged but none of them especially memorable. (It doesn’t even milk the unusual spectacle of an old man in his 60s killing millennials.) What’s lacking, mostly, is human interest – though director David Gordon Green actually makes a point of showing incidental humanity, only to then snuff it out. Again and again, minor characters are allowed to become individuals, then dispatched by the monster. A cop explains the concept of a banh mi sandwich to his less-hip partner; a guy kills some time doing yo-yo tricks; a young boy tells his dad that he doesn’t mind going hunting but it’s getting in the way of his dance class, and the dance class means a lot to him. Green made his name with films (like George Washington) that delighted in quirky behaviour, but quirky behaviour is now just a prelude to brutal, unfeeling slaughter. The cruel urge to humanise victims just before Michael gets them is so perverse it’s almost black comedy (co-writer Danny McBride is of course better-known as a comic actor). It’s like a Monty Python gag where a person yells ‘I’m free! Free, I tell you!’, only to be instantly squashed by a falling piano.

Then again, I may be making Halloween sound more interesting than it actually is. Suffice to say that the film is faithful, efficient, not especially smart (or no smarter than it has to be), builds to a suitably fiery climax, features a number of crowd-pleasing jokes and will probably spawn a sequel, given how successful it’s proving. (It may also spawn concerned think-pieces with titles like ‘Insensitive Films for Insensitive Times’; but that’s another matter.) There was really no need to revisit this familiar franchise – but after all, as the small-town sheriff puts it before the Myers rampage grows too big to ignore, “What do you want me to do, cancel Halloween?”. Clearly not. Cancelling any future reboots of Halloween might be an idea, though.

Superyacht linked to Malaysia’s 1MDB scandal goes up for auction