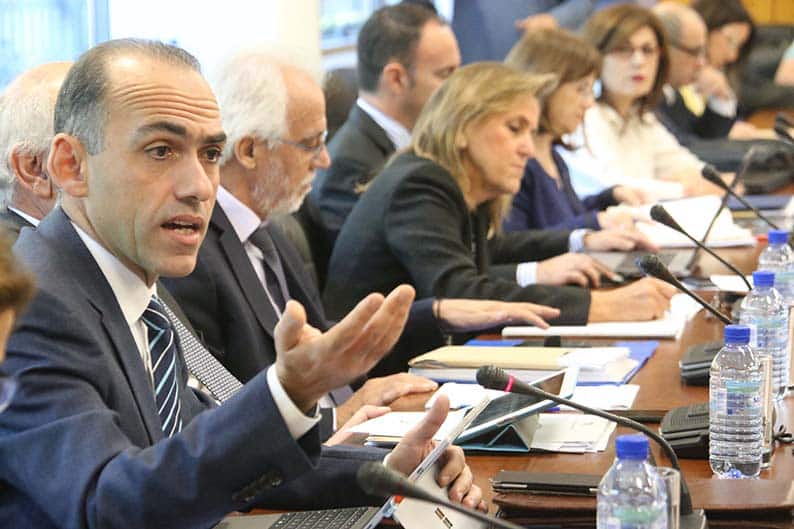 Economic growth is expected to exceed three per cent over the next three years, Finance Minister Harris Georgiades told MPs on Monday.
He stressed that the state from now on needs to focus on tertiary education which contributes almost as much to the GDP as the shipping sector. Another focus should be on research and innovation.
He also rejected claims that the economy showed signs of a bubble.
Presenting the 2019 state budget to the House finance committee, the minister said that the state budget remains balanced and that any surpluses would be used to reduce public debt.
“This is the basic principle, this is our policy and we continue with that,” he said.
He said that the public debt is expected to increase to 104 per cent of the GDP, despite estimates of 110 per cent, as a result of government moves to support the sale of the Co-op bank, while in 2019 the public debt would fall to 97 per cent.
Georgiades told the MPs that the government plans to continue its policy of no tax-rise.
The government plans to abolish stamp duty, alter road tax, eliminate fuel tax and reduce tax imposed on interest paid as a special contribution for the defence from 30 per cent to 17 per cent.
An economy which is growing for the third consecutive year with a growth rate exceeding four per cent should aim at encouraging savings, he noted.
Georgiades added that a public consultation would start very soon on rendering the submission of tax declaration obligatory irrespective of income, “to close any window of tax evasion”.
“Before you lies a budget with no deficits, no exaggerations, without the mistakes of the past, for which we have paid, with a prudent increase in spending that allows us to fulfill our programme, our needs, new projects and policies and with an equally prudent tax reduction. That is, a budget proposal that secures stability and safety and I call upon you to approve it after you will have examined it,” he told MPs.
The minister rejected claims that there was an economic bubble, saying that the economy “presented all the opposite features of an economic bubble”, but noted that the sales of high-value property would have to be monitored.
“Especially the sector of high – value properties, such as in Limassol, needs to be monitored. It does not present the characteristics of a conventional bubble but I would agree that it needs to be monitored carefully,” he added.
Georgiades said that social housing is included in the government planning and would be promoted by the interior ministry.