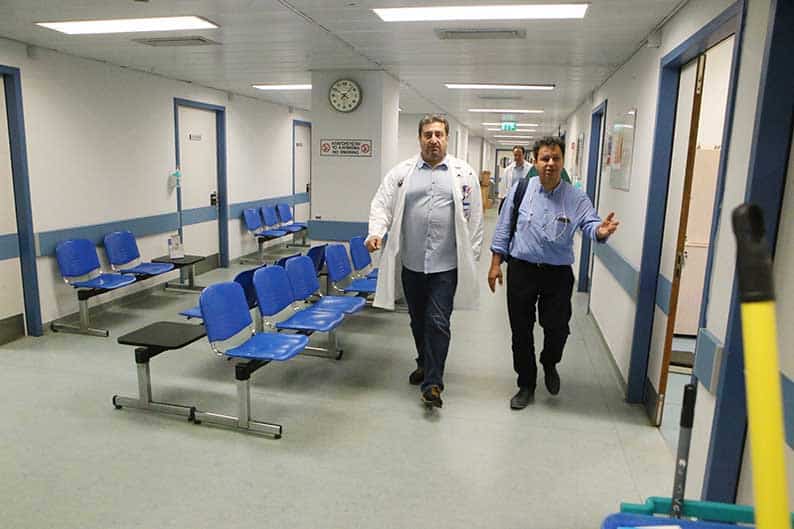 The standoff in the health sector intensified on Monday after the government dismissed as impossible some of the demands private doctors have made in exchange for taking part in the National Health Scheme (Gesy).

Less than a year before the first phase of the Gesy kicks in with primary health care, the medical association announced on Monday that it was interrupting “the infertile dialogue” with the Health Insurance Organisation (HIO) concerning the pay of private doctors under the heath scheme unless all their demands were satisfied.

Health Minister Constantinos Ioannou and the HIO argue that some of the doctors’ demands cannot be satisfied as they are not provided for in the law covering Gesy and run counter to the philosophy of the health scheme. They said they are willing to talk with doctors but within a set timeframe as Gesy will kick in on the announced dates regardless.

Ioannou said that he would invite the Cyprus Medical association (CyMA) and the HIO to a meeting within days in a bid to lift the impasse.

In a resolution following a general meeting last Saturday, CyMA listed five conditions under which private doctors would take part in the Gesy.

The resolution calls for an increase in the Gesy budget so that it reaches the EU average to ensure the quality of health services, patient safety and the sustainability of the scheme.

They also called for full administrative and financial autonomy of state hospitals before Gesy is implemented. As regards doctors’ fees for taking part in Gesy, they should be in accordance with the proposals CyMA has already submitted.

A guaranteed unit price is also required for specialist doctors involved in outpatient care in addition to inpatient fees per medical procedure.

The doctors are also asking for a clear explanation and written, legal guarantees which cover the terms under which both private and state doctors take part in Gesy, in addition to the freedom of private doctors in Gesy to practise as they see fit.

Ioannou said on Monday that these conditions cannot be satisfied as a whole. He said that satisfying these demands would mean changing the philosophy of the Gesy as it has been unanimously passed last year by the House plenum.

There cannot be a change to the Gesy budget, he said, as it has already been calculated and any changes would mean legal adjustments.

“We are not willing to enter into a procedure of (legal) adjustments,” Ioannou told state broadcaster CyBC. What can be changed, he said, is the way the budget is allocated.

“The Gesy budget has been based on an actuarial study and has received the approval of the European Bank, European Commission and confirmed by Eurostat data on the actual expenditure on the health sector of Cyprus,” he said.

As regards hospital autonomy, he said that the law does not provide for full hospital independence before the first stage of Gesy is launched.  Gesy and hospital autonomy will take place at the same time, he said, adding that autonomy is expected to be completed within five years.

“I wonder why are private doctors so much concerned about the autonomy of state hospitals?” he asked.

“We are willing to enter a dialogue. There can be convergences only if there is will from both sides,” Ioannou said.

The head of the HIO, Thomas Antoniou, agreed that several of CyMA’s conditions are outside the negotiation framework agreed by both sides.

He also said that CyMA must make clear what they mean by employment terms, as there will be no employer-employee relationship under the Gesy as regards private doctors.

Antoniou added that their demand for private doctors in Gesy to be free to practise as they see fit, cannot be.

“We will give time for dialogue but there cannot be a dead-end or a never-ending dialogue,” Antoniou told CyBC. He said that phase one of Gesy will begin on June 1 as per the law and that whoever wants to, is free to join.

The head of CyMA, Petros Agathangelou, said later on Monday at a press conference that if all their demands are satisfied, doctors would agree on their participation to Gesy “even tomorrow”.

He announced that CyMA would interrupt the “infertile dialogue” with the HIO and called for the involvement of political parties, adding that their conditions “ensure quality healthcare for patients and dignity for doctors”.

He said CyMA would invite political leaders to study its proposals “so that they could sit at the dialogue table and find solutions”.

On the argument that Gesy laws have already been passed, he said that law provides for amendments.  The current law, he said, “is inapplicable and will fail”.