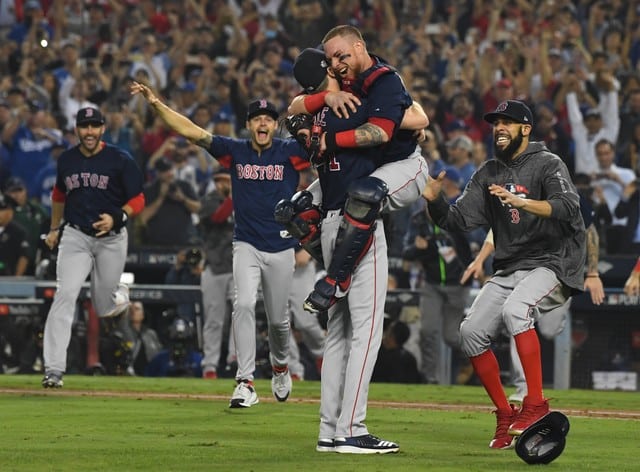 The Boston Red Sox clinched their ninth World Series with two games to spare when they beat the Los Angeles Dodgers 5-1 at Dodger Stadium on Sunday.

The Boston Red Sox went by the motto “Do damage” this season, and damage they did.

Dominating Major League Baseball by posting a 119-57 record through the regular and post-season, they capped the year off with an emphatic World Series win that puts them in the “best team ever” conversation.

After running away with the competitive AL East, they dispatched the New York Yankees in four games, defending champions Houston in five, before blowing away the power-packed Los Angeles Dodgers, also in five, to take the title.

Their 119 total wins trailed only the 1998 Yankees, who had 125 wins and are widely considered the best team of all time, and the 2001 Seattle Mariners, who notched 120 wins but failed to win the World Series.

The team posted a franchise record 108 regular season victories before rolling through the playoffs to deliver the Red Sox their fourth title since breaking the 86-year championship drought in 2004.

The Red Sox, who have the highest payroll in Major League Baseball, got contributions on offense up and down the lineup while silencing opposing teams with an aces-loaded pitching staff.

Right fielder Mookie Betts, batting .346 during the regular season, is likely to be named AL MVP unless the award goes to team mate J.D. Martinez, who slugged 43 home runs and 130 RBIs en route to the best season of his career.

Their pitching staff is anchored by Cy Young winner David Price, who put to rest any questions about his ability to pitch under the bright lights of the postseason by winning both his World Series starts, including Sunday’s clincher.

It also boasts seven-time All Star Chris Sale, who took over from Price and finished off the Dodgers on Sunday.

The team’s relief pitching, considered a potential weakness heading into October, were outstanding when it mattered most, combining for a 2.71 ERA throughout a largely stress-free playoffs.

And the scary part for the Red Sox’s rivals is that this team may just be getting started.

They have a young core and an impressive rookie manager in Alex Cora, whose every move during the World Series seemed to pay off.

“Whatever he says, we listen and we do it,” World Series MVP Steve Pearce said after the game.

“We gelled together behind him, and everybody knew their roles because he was such a great leader, we followed him.

“I couldn’t have asked for a better manager to play with, play for. In this great moment that we’ve had, it’s been a great season, and he’s definitely been the head of all of it.”