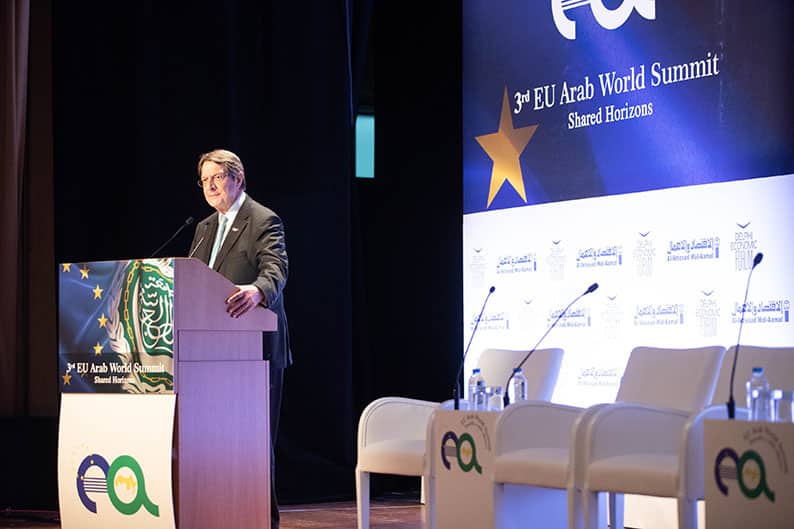 Anastasiades: Greece and Cyprus act as ambassadors of the Arab world within the EU

A viable and functional settlement solution to the Cyprus problem would turn the island into a shining example of cooperation between Christians and Muslims and contribute to creating stability in the region, President Nicos Anastasiades said on Monday.

In his address at the third EU-Arab Summit held in Athens, Anastasiades, referring to the importance of peace and stability in the region, stressed the importance and multiple benefits of a settlement to the Cyprus problem.

A settlement “would turn Cyprus into a bright example of ethnic, cultural, religious and linguistic cooperation between Christian and Muslim communities, contributing to efforts to create an environment of stability in the region,” he said.

Anastasiades called on Turkey to demonstrate determination for a solution “away from claims that are inconsistent with the principles that should govern an independent, sovereign, European state”.

As regards cooperation with Arab countries, he said that both Cyprus and Greece, maintaining historic ties with neighbouring Arab countries, “have, through joint actions, not only further strengthened ties but also acted as ambassadors of the Arab world within the EU in order to raise awareness and to strengthen measures that will contribute to the peace and stability of the countries of the region.”

The trilateral agreements the two countries have forged with Eastern Mediterranean Arab countries have yielded significant benefits and resulted in similar cooperation with countries of the Gulf, Anastasiades said.

These relations, he said, have also had an impact on other European countries that exhibit great interest in cooperating with Arab states and thus contributing in further improvement of relations with Arab countries.

“The serious challenges we face collectively urgently require the strengthening of the partnerships and the interaction between Europe and the Arab League, both at political and socio-economic level,” he said.

At the same time, he said, the discovery of hydrocarbons in the eastern Mediterranean creates new data on the EU’s energy security.

Anastasiades had also a meeting with Greek Prime Minister Alexis Tsipras on the sidelines of the summit where he briefed him on his meeting last Friday with Turkish Cypriot leader Mustafa Akinci. He also briefed Tsipras on the new round of contacts of the UN secretary-general’s special envoy Jane Holl Lute to explore whether the two sides are bringing new ideas on the negotiation table for a way out of the stalemate.

Anastasiades informed Tsipras of his idea of a ‘loose’ federation concerning the powers of the central government as part of a settlement based on a bicommunal, bizonal federation.

He also had a trilateral meeting with Tsipras and the prime minister of Bulgaria, Boyko Borissov. Bulgaria has expressed interest in the trilateral agreements Cyprus and Greece have forged with Arab countries. All three men expressed willingness to further expand these relations with Bulgaria’s participation.

Anastasiades, who is accompanied by government spokesman Prodromos Prodromou, will also attend the official dinner hosted by Tsipras later on Monday in honour of the leaders of the states participating in the summit.

He will return to Cyprus on Wednesday.