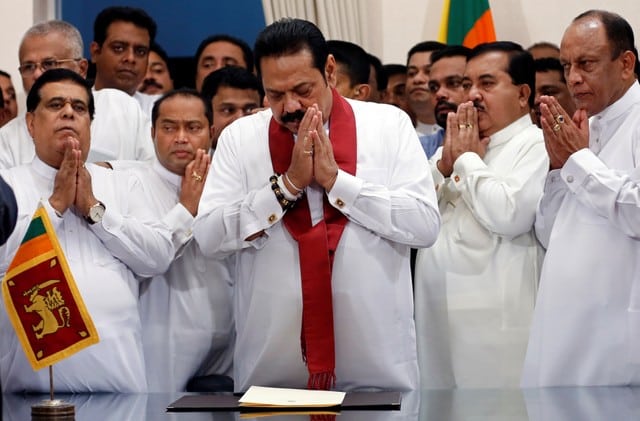 Sri Lanka President Maithripala Sirisena is under increasing pressure to uphold the island nation’s constitution and reconvene parliament after his decision to replace the prime minister triggered political turmoil.

Sri Lanka was plunged into the crisis on Friday when Sirisena sacked Prime Minister Ranil Wickremesinghe and swore in ex-president Mahinda Rajapaksa to replace him, breaking up a fragile coalition governing the island.

Wickremesinghe said his sacking was illegal and he maintained that he was still prime minister, leading to a standoff between his party and labour unions loyal to Sirisena.

On Sunday, Arjuna Ranatunga, petroleum minister in the ousted cabinet, tried to re-enter his office, leading to clashes in which one person was killed and two were injured.

The crisis has important ramifications in a battle for influence in south Asia between Sri Lanka‘s traditional ally India and China, a country that is playing an increasing role in the region.

China, long seen as a supporter of Rajapaksa, has already congratulated him on becoming prime minister.

But India, the European Union and the United States have all urged Sirisena to abide by the constitution.

“We call on the president, in consultation with the speaker, to immediately reconvene parliament and allow the democratically elected representatives of the Sri Lankan people to fulfil their responsibilities to affirm who will lead their government,” US State Department spokeswoman Heather Nauert said in a statement.

Sources in diplomatic missions said most foreign envoys had yet to send congratulatory messages to Rajapaksa as it could be interpreted as legitimising the new government while there were still complaints his appointment was unconstitutional.

Rajapaksa was not immediately reachable for comment on Monday.

A 2015 constitutional amendment diluted the powers of the president, making Sirisena’s action unconstitutional, said Kalana Senaratne, a senior lecturer at the University of Peradeniya.

Despite Wickremesinghe’s insistence he was still prime minister, his police security detail had been drastically reduced, media reported.

Early on Monday, guards were seen leaving his official residence in lorries with their bags, a Reuters witness said.

The political turmoil comes at a critical time for a Sri Lankan economy struggling with slow growth and a weakening currency.

If tensions continue, Sri Lanka could struggle to refinance government debt that comes due in early 2019 at an affordable rate, credit rating agency Moody’s said.

The country’s bonds sold off on Monday, while the Sri Lankan rupee fell 0.58 per cent to an all-time low.

“Additionally, the possible social tensions that may unfold in the next few weeks would have a negative impact on the economy, which is already growing slowly.”

India and western countries have previously expressed concern about Rajapaksa’s ties to China, after he ushered in billions of dollars of investment from Beijing to rebuild the country following the end of a 26-year war against ethnic Tamil separatists in 2009.

That investment has since put Sri Lanka deep in debt and forced it to hand over control of a strategic port to China.