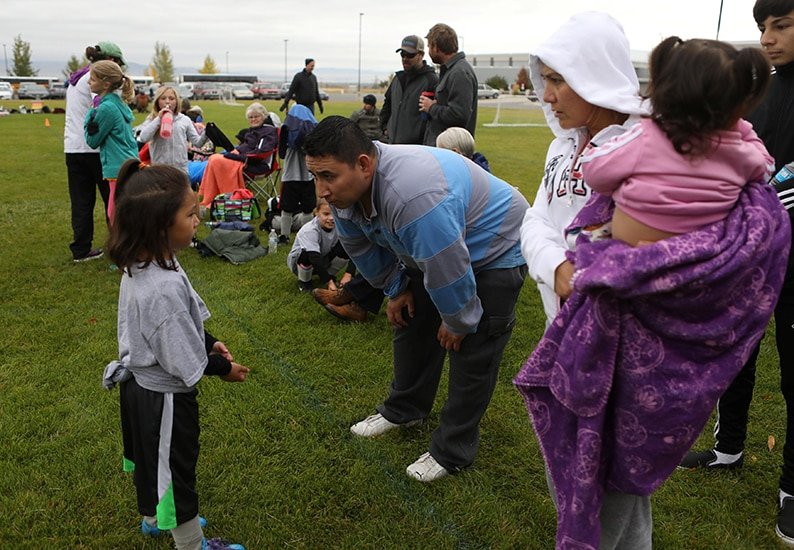 Luis Rodriguez, a permanent US resident from Mexico, talks to his daughter Yadira

US President Donald Trump plans to push an executive order to end the right of US citizenship to children born in the United States to non-citizens and immigrants in the country illegally, he told Axios in an interview published on Tuesday, a move that would prompt a constitutional fight.

It was unclear what specific action his order would pursue, and Trump gave no other details.

Trump has ratcheted up his hard-line immigration stance one week before US congressional elections, as the country grapples with race and national identity amid bursts of violence, including a series of bombs sent to top Democrats and other Trump critics as well as the deadliest attack on a synagogue in US history.

Seeking to end so-called birthright citizenship outlined in the 14th Amendment would take direct aim at the Constitution and likely prompt immediately legal challenges and potential opposition in Congress.

Changing an amendment in the Constitution would require the support of two-thirds of the US House of Representatives and the Senate and the backing of three-fourths of US state legislatures at a constitutional convention.

But Trump said he has talked to his legal counsel and was advised he could enact the change on his own, contrary to the view of many constitutional experts.

Asked about the dispute over such presidential powers, Trump said: “You can definitely do it with an act of Congress. But now they’re saying I can do it just with an executive order.”

“It’s in the process. It’ll happen,” he told Axios in the interview, which will air in full on the HBO pay cable channel on Sunday.

US Senator Chris Coons, a Democrat on the Senate Foreign Relations Committee, said on Tuesday that Trump “was driving a false narrative on immigration” in many ways to stoke fear ahead of the Nov. 6 vote.

The 14th Amendment allows for “all persons born or naturalised in the United States, and subject to the jurisdiction thereof, are citizens of the United States and of the State wherein they reside.”

A legal challenge would prompt the nation’s courts to weigh in on what would be one of the most sweeping moves of the Trump administration. It has already targeted immigration through a travel ban from several Muslim-majority countries, child-parent separations for migrants, refugee policies and other actions.

In 1898, the US Supreme Court reaffirmed the right of citizenship to children born to legal permanent residents. But conservatives say that right should not apply to everyone, including immigrants in the country illegally or those with temporary legal status, Axios reported.

Trump, who railed against illegal immigration during the 2016 US presidential election, has seized on the issue in recent weeks as he seeks to bolster fellow Republicans ahead of next week’s contests.

On Monday, his administration moved to send more than 5,200 troops to help secure the border with Mexico as a caravan of Central American migrants makes its way there. The caravan, moving mostly on foot, is not expected to arrive for several weeks and it was unclear how many would arrive at the border.

Democrats and other critics have decried the president’s rhetoric as inflammatory, urging Trump to tone down his language and calling on the electorate to use next week’s vote as a way to reject such policies.