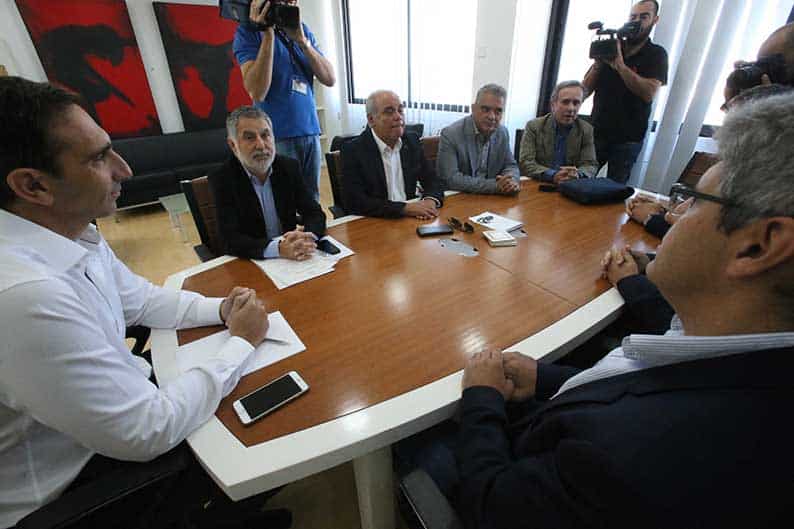 The medical association (CyMA) announced on Wednesday all talks with the government were at an end until private doctors receive an official response to their set of demands for participating in the National Health Scheme (Gesy).

The head of CyMA Petros Agathangelou said meeting all of their demands were a prerequisite for private doctors to participate in Gesy.

Speaking after delivering their memo to Health Minister Constantinos Ioannou, he said their next steps would depend on the response of the Health Insurance Organisation (HIO).

Ioannou had announced earlier in the week that he would act as mediator between the CyMA and the HIO, the government body discussing the pay of private doctors under Gesy.

After their meeting with the minister, Agathangelou said that CyMA would not be holding consultations with anyone for the time being.

He added that their next move would depend on the official response from the HIO to their demands.

He reiterated that the doctors’ aim was “a viable and qualitatively upgraded Gesy, so that Cypriot citizens truly enjoy upgraded health services”.

The health minister made no statements after the meeting.

But HIO officials insist that the doctors’ demands make no sense.

Director general of the HIO, Athos Tsinontides, told state broadcaster CyBC on Wednesday that he was not convinced their conditions would make Gesy more functional and viable.

One demand is that private doctors within Gesy should be free to practise outside the system, but Tsinontides said CyMA needed to explain exactly what they mean by this.

“We need further explanations, what do they mean operate under the Gesy but be able to also do private practice, and when will they be able to do this, and why should they since they will be compensated by the state for every beneficiary for any medical act?” Tsinontides asked.

On another demand, the raising of the Gesy budget, he said that the amount estimated by the government was meant to ensure the viability of the health scheme.

“I cannot exactly understand what CyMA wants,” he said.

The resolution, agreed by members of CyMA at a general meeting last Saturday, lists three other conditions under which private doctors would take part in the Gesy.

It called for full administrative and financial autonomy of state hospitals before Gesy is implemented and a guaranteed unit price for specialist doctors involved in outpatient care in addition to inpatient fees per medical procedure.

The doctors are also asking for a clear explanation and written, legal guarantees which cover the terms under which both private and state doctors take part in Gesy.

Ioannou said on Monday that these conditions cannot be satisfied as a whole. He said that satisfying these demands would mean changing the philosophy of the Gesy as it has been unanimously passed last year by the House plenum.

CyMA’s proposals are very similar to those on documents leaked to the media some two weeks ago, calling on the private health sector to boycott Gesy to force the government to satisfy their demands.

Tension between CyMA and the HIO had been brewing for a while but escalated after the latter made public last week estimated remuneration for private sector general physicians and specialists under the Gesy to help them decide whether they would like to join. CyMA said that that was an attempt by the HIO to divide doctors ahead of last Saturday’s general assembly and that the figures presented in the estimations did not add up.

The HIO had said in response that it made these documents public after realising the private medical world – contrary to what has been agreed between the two sides – had not been informed by CyMA of these figures. It also said that the figures were based on actuarial studies and official data.

The latest developments have angered patients’ associations. Representatives of the Social Alliance for the Implementation of the Gesy, consisting of patients’ and consumers’ associations, and left-wing and right-wing trade unions, were to meet on Wednesday afternoon to decide on a course of action.

British PM May backs call for de-escalation in Yemen