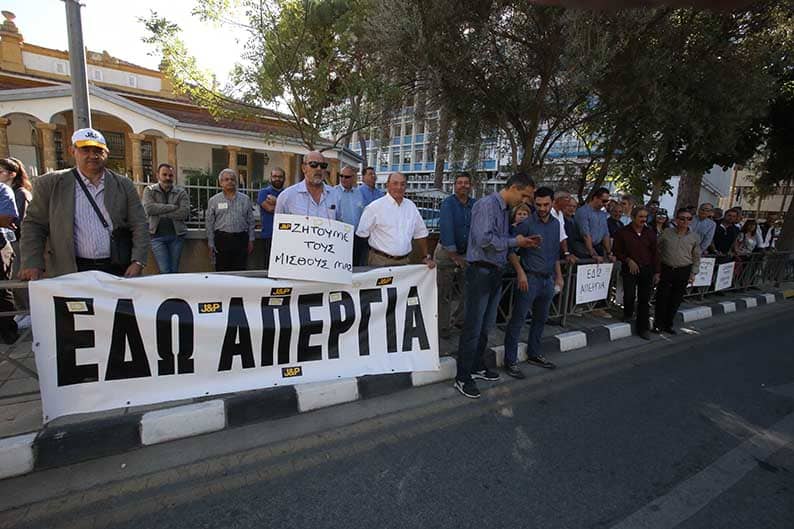 THE Joannou family, representing half of Joannou & Paraskevaides Overseas Ltd that went into liquidation last month, said on Thursday they have filed a law suit against their business partners demanding the return of over €20m owed to cover part of their obligations to workers on construction projects in Saudi Arabia.

The squabble between the two families that run the construction giant, has left some 200 Cypriot workers stranded in the Arab nation, frustrated if and how they are supposed to return home.

In response to a letter sent last week to the Joannou and Paraskevaides families by the employees in Saudi Arabia, the Joannou family said that they have already assumed their responsibilities and called on their business partners to do the same, by returning the money they owe to the company.

In their letter, the employees said that their living conditions of the mostly third-country nationals, were “wretched”.

The company employs around 6,000 people in Saudi Arabia, of whom around 200 are Cypriots. The Cypriot employees said that they haven’t been paid for five months. They also said that the company has misappropriated the amount withheld from their wages for social insurance and the welfare fund, which have not been paid to the Cyprus government for 2017 and 2018.

“The company is unable to issue airline tickets for repatriation, renewal of residence permit and exit from the country and as a result thousands of them remain trapped and desperate, not knowing how they will be repatriated,” the Saudi Arabia employees said in their letter.

The Joannou family said in a written statement that their top priority remains dealing as best they can with the problems of employees.

“The Joannou family has filed a law suit so that the $23m (around €20.2m) the Paraskevaides family owes to J&P, to be returned,” it said.  The aim is for that money to cover part of the company’s obligations to its employees.

The statement also said that as per the Joannou family’s commitment, any of the workers currently in Saudi Arabia “have the capacity and ability to return to Cyprus promptly, if they wish to.”

This caused the ire of the employees in the Saudi kingdom, who, in a reply later on Thursday, asked how they were supposed to do that.

“How will we return? On our own expenses and without being paid wages? On an empty pocket?” employees asked.

The Joannou family also said in the statement that the financial position of the company proved irreversible and although initially banks were willing to contribute by disbursing part of a new loan with which August wages were paid, they decided in September to interrupt the financing.

The difficult decision, on the initiative of the Joannou family, for J&P to go into administration, the statement said, “has in fact led the banks to mobilise to find a solution that we hope will help the company, and in particular its employees”.

It said that things look positive.

“We fully understand the anxiety of the staff and the difficult moments that our employees and their families are going through.  We are doing what’s possible to correct the situation to the greatest possible extent,” the Joannou family said.

Staff said that they were tired of the stereotype comments of the last ten months that the family was trying to solve their problems. They urged the two families “to show a little humanity to the 6,000 employees, just like the two great founders of the gompany, Giorgos Paraskevaides and Stelios Joannou (would have done). Do it.”

J&P Overseas, that was established in Guernsey in 1961, was initially placed under administration last month after its creditors rejected its restructuring proposal. A court in Guernsey had appointed two administrators from the consulting firm Alvarez and Marsal to try and secure adequate funding. But after the administrators failed to secure funding, the court put the company into liquidation with liquidators from Alvarez & Marsal Europe LLP.

The winding up of the company has also affected around 200 employees of Cyprus-based Ten Group Services, which offered support services to J&P Overseas. The staff that was offering procurement, tendering and other services to J&P Overseas, went on indefinite strike in Nicosia this week demanding unpaid wages for the last two months, but also the 13th and 14th salaries they were owed. The employees are also demanding settlement of outstanding benefits such as provident fund and social insurance contributions.