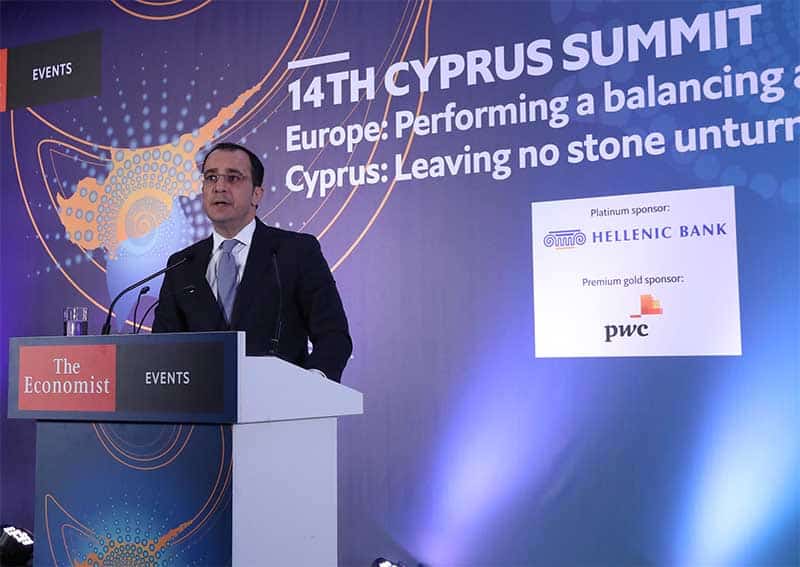 Nicosia wants Turkey to be involved in the energy developments in the region, but it has first to help solve the Cyprus problem, Foreign Minister Nicos Christodoulides said on Friday.

He was speaking at a roundtable discussion at the Economist’s 14th Cyprus Summit that took place in Nicosia. The discussion, on energy security and regional conflicts, took place with the participation of Iraeli Deputy Minister to the Prime Minister’s Office Michael Oren and Kathleen Doherty, US Ambassador to Cyprus.

Christodoulides said the EU supports Cyprusʼ efforts, both by repeatedly stressing its support to the exercise of our sovereign rights in its EEZ but also by participating in the EastMed pipeline project, which the European Commission adopted as a Project of Common Interest.

Referring to the trilateral cooperation partnerships that Cyprus established with Greece and neighbouring countries, he said that they are an instrument for promoting cooperation in the region and beyond, and are open to all countries who share the vision and respect international law.

Christodoulides said that the cooperation developed in the region can facilitate efforts to reunite the country through a viable settlement that will allow Cyprus to maintain its role as a stable, reliable honest broker in the region.

“A pre-requisite for this is that Turkey realises that it has much more to lose than gain from the current status quo, which prevents Ankara from participating in the web of cooperation in our neighbourhood,” he said.

Christodoulides recalled that Turkey has in the last six months almost on a daily basis been making statements threatening Cyprus and all those companies participating in the Cyprus EEZ.

He said that Nicosia will not follow this Turkish approach. “We are very confident on what we do, it is based on international law.”

Nicosia, he said, wants Turkey to be involved in the energy developments in the region but in order to be in a position to examine this possibility, Turkey has to solve the Cyprus problem, otherwise, for Nicosia the option is not there. It is up to Turkey, he said, adding that Ankara has to work to solve the Cyprus issue.

At the same summit Energy Minister Yiorgos Lakkotrypis said that Cyprus is discussing a new wave of the exploration programmes with the licensees in its EEZ.

“We discuss the scheduling, the number of wells, how we create synergies in order to achieve extensive exploration,” he said.

Among the priorities, he said, was the exploration of Cyprus offshore block 10 starting in the middle of November. He also referred to the anticipated licensing of block 7 over the next few months.

Lakkotrypis said that Cyprus was also planning to conclude and sign an intergovernmental agreement similar to the one signed with Egypt, concerning the EastMed pipeline that will involve Greece, Israel and Cyprus. The country is also pursuing further expansion of relations with the countries that would constitute that EastMed corridor, Bulgaria and Romania.