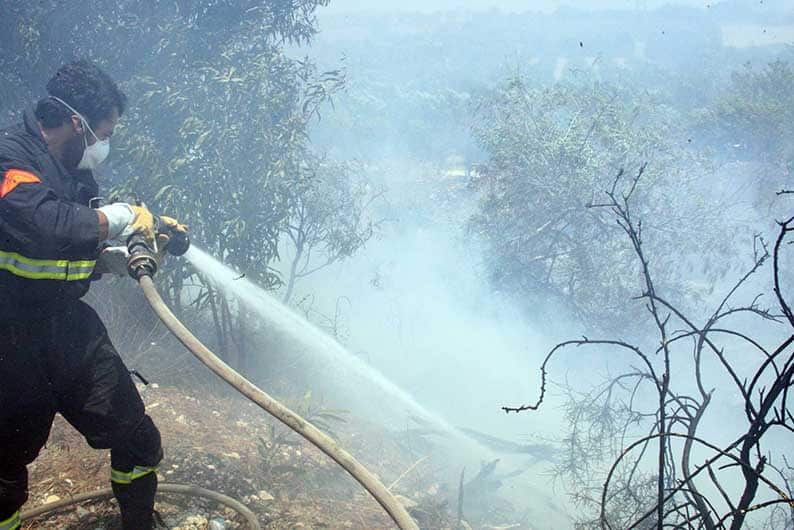 Authorities on Monday said that they believe the massive fire in Lofou in the Limassol district that took 15 hours to extinguish on Sunday was arson and that they have a suspect.

It burned around 1.5 square kilometres of pine trees and wild vegetation.

The fire was one of four firemen and firefighting aircraft had to tackle on Sunday, two in Limassol and two in Paphos.

The one between Lofou and Ayios Therapon villages in Limassol was the largest and most difficult to put out. It started at around 11.30 pm on Saturday in a hard-to-reach area and it was not declared under control until around 14.40pm on Sunday.

The task of the firefighting crews was very difficult due to very strong winds in the area. The two villages were not threatened by the blaze.

The road between Alassa and Ayios Therapon was closed to traffic for most of the day.

Another blaze broke out at around 10.30 am in the state forest in Pareklisia, also in Limassol. It was put under control at around 1pm after burning around one hectare of pine trees.

Fire department chief, Markos Trangolas, told state broadcaster CyBC on Monday that they have reasons to believe the fire in Lofou was not random, as there were two fires on the same site 10 days ago, 150 metres apart.

“Yesterday’s fire started just 50 metres away from the site of the previous ones,” Trangolas said.

As the fire was in a hard-to-reach area, he said, human negligence has been ruled out as no one could carry out any activities there that could spark a blaze.

“Yes, it was arson, we are assessing information, we have also given to the police, we suspect a person,” Trangolas said. Usually, he said, arsonists choose days with strong winds so that the fire spreads more easily.

He said that they have no information linking Sunday’s fires to the start of the hunting season.

Two more fires, broke out in the Paphos district, in Peyia and Inia close to Akamas.

On Sunday morning the blaze near Peyia started at around 7.50am, near a residential area, but firefighters were able to douse it before spreading. It was put under control at around 11am. It burned around 1.5 hectares of dry vegetation and trees. Electricity cables were also affected.

Later in the day, at around 2.35pm, another fire erupted in Inia that was put out some four hours later. It burned 1.5 hectares of olive trees and wild vegetation.