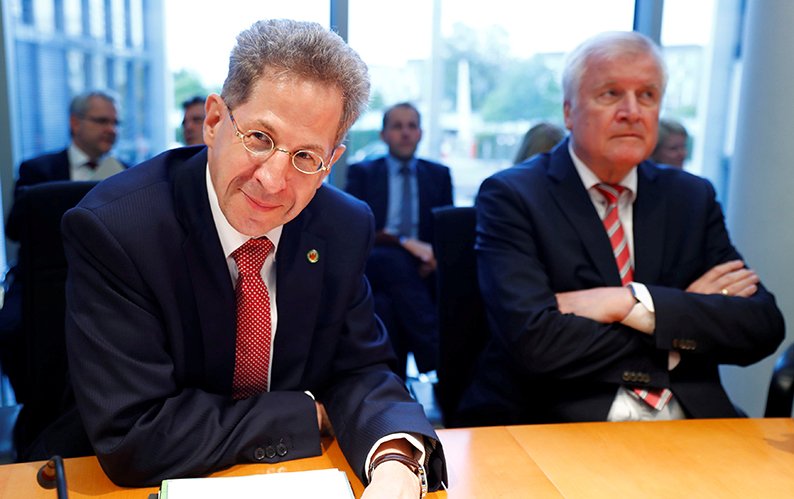 German Interior Minister Horst Seehofer faced calls on Monday to dismiss the outgoing head of domestic intelligence from a new advisory role, after the spy condemned what he called “naive and leftist” government policies and said he might enter politics.

The remarks, made at a closed meeting of European intelligence chiefs and published by the newspaper Sueddeutsche Zeitung on Monday, threatened to re-open a rift which Chancellor Angela Merkel’s fractious coalition had only just patched up.

Seehofer once before rescued chief spy Hans-Georg Maassen from dismissal when he questioned the authenticity of videos showing far-right extremists chasing immigrants in the eastern city of Chemnitz.

This time Maassen, whose agency monitors extremist threats to Germany’s constitutional order, compared the videos to Russian propaganda and presented himself as the victim of a witch-hunt by “radical-left forces” in the Social Democratic Party (SPD), junior partner in Merkel’s coalition.

“I’m seen in Germany as a critic of idealistic, naive and leftist foreign and security policy,” he said. “I can imagine a life outside public service, for example in politics or business.”

Many on the right in Germany are particularly scornful of what they see as Merkel’s liberal immigration policy, which has been backed by the SPD. Germany has admitted over a million mostly Muslim asylum seekers since the 2015 migration crisis.

Even before Maassen’s remarks were published in full, the SPD and opposition parties had been demanding Maassen’s sacking for overstepping the bounds of neutrality that German civil servants are expected to adhere to.

The interior ministry said Seehofer, who himself is facing calls to quit as head of his Christian Social Union (CSU) after it lost its majority in last month’s Bavarian regional election, would make a decision over Maassen’s fate after an investigation into the speech was completed.

The recriminations follow bruising setbacks for all three parties in Merkel’s coalition in crucial regional votes over the past month. The poor results prompted Merkel to resign as head of the centre-right Christian Democrats (CDU) and many are calling for the loveless coalition to end.

Maassen only escaped dismissal after his first political intervention, made in an interview with top-selling tabloid Bild in September, thanks to the patronage of Seehofer, who created a senior role for him in his ministry.

But Seehofer’s patronage may mean less than it did, with the CSU fuming after he led it to its weakest result in years.

On Sunday the CSU, which has for decades dominated cultural and economic life in Germany’s richest region, was forced to concede Bavaria’s economy, education and environment ministries to the Free Voters, its new upstart coalition partner.

Cyprus at low risk of tsunamis, but still prepared