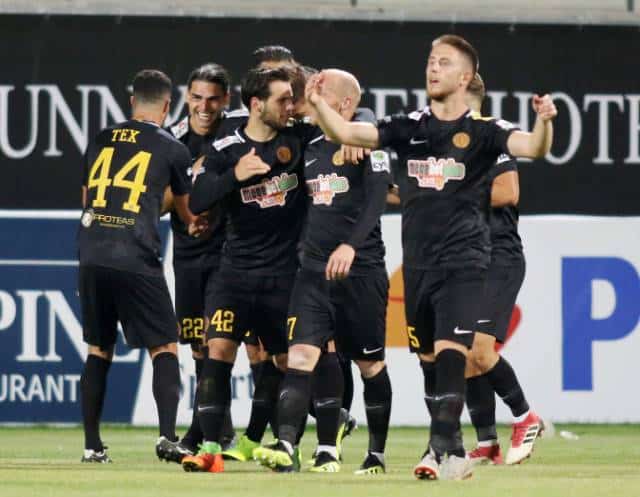 It was a great weekend for AEL as they stretched their lead at the top of the Cyprus championship from three to five points following an impressive away win against AEK.

Their closest rivals, Apollon, unexpectedly lost at home to Anorthosis, while Apoel could only manage a draw away to Pafos FC.

AEL produced one of their most accomplished performances of the season and defeated AEK by the solitary goal at a ground that they had not won in for their last four visits.

AEK were a shadow of themselves, rarely putting two passes together while their otherwise solid defence was being continuously exposed by AEL’s speedy strikers.

It was a richly deserved win for the Limassol team who controlled play for the better part of 60 minutes with consummate ease and had their strikers been more clinical in front of goal the game would been decided well before the final whistle.

The only goal of the game came in the 50th minute and it was gifted to AEL by AEK goalkeeper Tonio, who dwelled too long on the ball allowing Hurado to block his attempted clearance and tap the ball into an empty net.

Apollon experienced their first defeat of the season after they went down 2-1 to Anorthosis in Limassol.
Anorthosis opened the score in the first minute through Mikael Duris and the same player doubled the score for the Famagusta team shortly after the half hour.

Apollon rallied and Anton Maglica reduced the deficit shortly after the break but despite laying siege on the Anorthosis goal they were unable to find a way past rookie goalkeeper Demetriou for the equaliser. He was also assisted by bar and post on four occasions.

Pafos FC and Apoel had to settle for a point each in a game of few chances.

Apoel were the better side for most of the game and should have taken the lead through Guilerme Dellatorre but the Brazilian somehow managed to direct his shot straight at goalkeeper Moll.

Al Tamari also went close twice while Pafos FC almost snatched the points in added time but Racic was wasteful from inside the area.

Omonia finally halted their poor run as they defeated Ermis Aradippou 2-1 in Yiannis Anastasiou’s first game in charge.
Both Omonia goals came from the penalty spot and were converted by Jordi Gomes while Ermis had temporarily equalised through Yiannis Mavrou.

In the final weekend game a spirited Enosis managed to claim all three points against Alki thanks to goals by Riera and Oudozi in the final 15 minutes of the game.