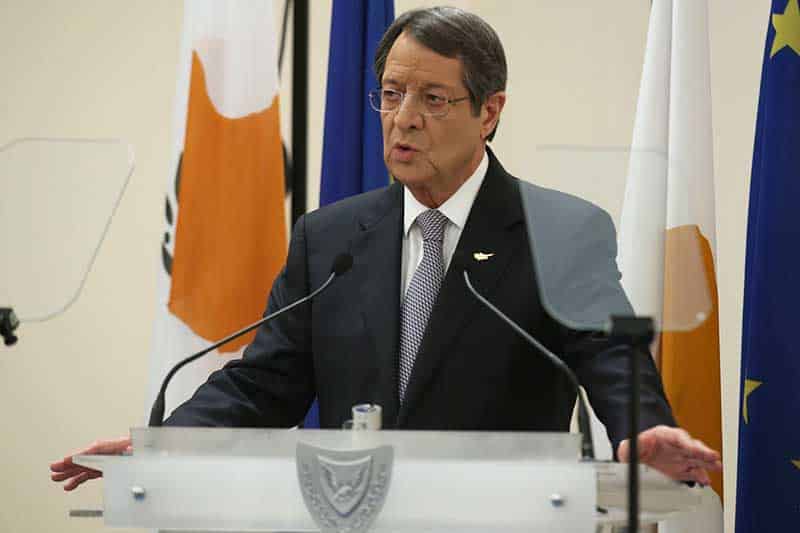 President Nicos Anastasiades on Tuesday said that he pitched his proposal of a decentralised federation to address the concerns of both communities and push for a functional and viable solution to the Cyprus problem.

He was addressing the public to inform about his idea for a decentralised federation as a model for reuniting the island.

Anastasiades, in response to those questioning his intentions concerning the UN Secretary-General’s framework said: “I would be insane to reject what the Greek Cypriot side has claimed and the outline of which the UNSG has put now on the agenda of the negotiations.”

He said he has already made clear his intention to engage in a dialogue from the point where it left off in Crans Montana in Switzerland in July 2017, provided that a new conference would be well prepared so as not to lead “to a new catastrophic impasse.”

His proposal of a decentralised federation is not new, he said, as it was included in a memo he submitted to the National Council in 2010. At the time he had expressed his concern that the centralisation of powers in a central state, instead of strengthening the entity “would multiply the risk of friction, impasse and paralysis, and would immediately threaten the functioning and viability of the state.”

Anastasiades said he re-pitched this proposal to allay concerns of both communities and give a push to the talks. He stressed that “decentralisation of powers was one thing, and loose federation another.”

The Turkish Cypriots, he said, are greatly concerned that the Greek Cypriots, as the majority, would abuse power with the risk the former be marginalised.

“To address their concerns, they have demanded a positive vote in every decision of a coordinated body of the Central State, whether this concerns the Cabinet or other institutions.”

At the same time, he said, Greek Cypriots “have reasonable concerns” that that right of Turkish Cypriots would lead to a non-functioning state, with visible risks of its collapse.

“This creates an insecurity for the future, in relation to the stability and certainty that they are currently experiencing,” he said.

Turkey’s insistence “on the outdated system of guarantees and intervention rights” and the permanent presence of Turkish troops are another concern, he said, as it creates concerns of the continuing dependence of Turkish Cypriots on Turkey and thus control of the Federal Republic of Cyprus by that country.

“In order to eliminate the concerns of both communities and the achievement of a functional and viable solution, I submitted to the National Council, as food for thought, the decentralisation, and I want to emphasise this, the decentralisation of those powers concerning the daily lives of citizens and/ or others that would not allow questioning,” he said.

The decentralisation of powers should not lead to questioning the “singular international personality, sovereignty and nationality of the state, unity of territory, people, the economy and natural wealth, defence and security, but also the guarding of the borders of the Federal State”.

Anastasiades said a decentralised federation would also safeguard the exclusive and effective representation and participation of the Federal State in the EU, the UN and other international organisations.

Anastasiades said that 44 years after the invasion, “and dozens of rounds of fruitless negotiations, the least we can do is reflect on how to lift the deadlock. How we can come up with a solution that would reassure the legitimate concerns of both communities.”

On that his proposal was very general, Anastasiades reiterated that it was food for thought, and called on political leaders to engage in dialogue with him to develop together positions to lead to a new round of talks and a solution acceptable to both communities.

Anastasiades also answered claims by the Turkish Cypriot side that it is the Greek Cypriots to blame for lack of progress over mobile phone and electricity grid links.

As regards mobile phone interconnectivity, he said that the Greek Cypriot side has the will and has also proposed a formula.

“But when the other side insists on political gains through the indirect recognition of companies registered in an illegal state, this cannot be,” he said. The Greek Cypriot side, he said, had made two proposals which were turned down by the other side.

“Do we want to serve the citizens, or the political expediency by indirectly recognising the illegal status of a regime?” he asked.

He added that some in the north also protest that the electricity grid link between the two sides has not been made yet.

“I will have you know we have been linked with the occupied areas since 2016 and we provide electricity to the Turkish Cypriots for a fee, of course,” he said.

On those opposing the opening of the Dherynia crossing, Anastasiades said that he did not believe that it would hinder plans for the return of Varosha, as some had argued, or not open it to avoid competition by businesses in the north. “These are not serious arguments,” he said. Anastasiades and Turkish Cypriot leader Mustafa Akinci agreed to open the crossings at Dherynia and Lefka on November 12.

Neither of the two leaders will attend the opening of the two checkpoints, he said, because that would draw great attention “as if it were the first time that something so important happened in Cyprus. “

Week of events to raise awareness of premature births