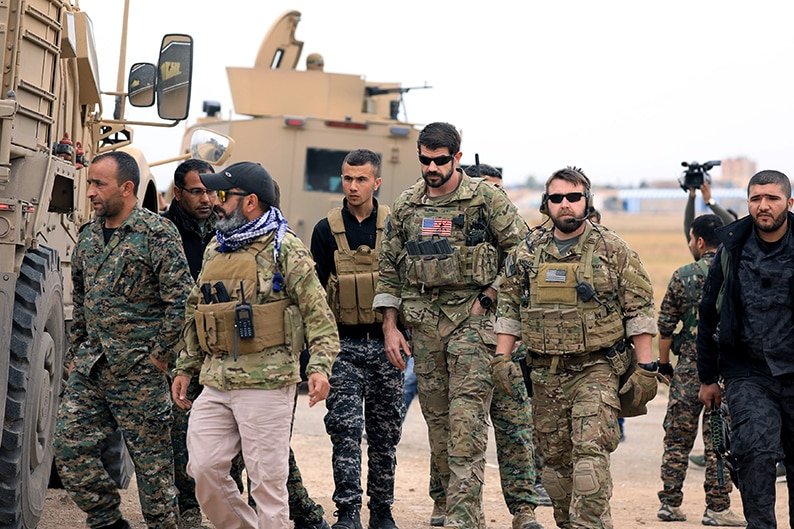 Syrian Democratic Forces and US troops are seen during a patrol near Turkish border in Hasakah, Syria

Turkish President Tayyip Erdogan said on Tuesday that joint US-Kurdish patrols just over the Turkish border with Syria were unacceptable and he expected US President Donald Trump to stop them.

Erdogan, set to meet Trump in Paris this weekend, told reporters he would discuss the patrols that he said were being carried out inside Syria by the United States and allied Kurdish Syrian Democratic Forces (SDF).

“I believe when we speak with Trump, they will probably stop this process,” he said.

The SDF said on Friday that US troops had started patrolling the border in a bid to defuse tensions with Ankara – though it did not say whether its own forces had joined in. The US-led coalition in Syria said there had been no increase in patrolling.

Erdogan’s concerns underlined the complex web of allegiance and enmity along the border that has been exacerbated by the civil war over the frontier in Syria.

The United States has backed and armed the SDF, describing them as allies in its fight against Islamic State militants in Syria.

That US-Kurdish alliance has alarmed Turkey – which says that Kurdish YPG fighters inside the SDF coalition are an offshoot of outlawed militant group inside its own territory.

Turkish military advances into northern Syria over the past two years have put US forces directly in the path of advancing troops from Turkey, Washington’s main Muslim Nato ally.

In another sign of the complex situation, the US and Turkey began separate joint patrols in northern Syria on Thursday with the aim of averting clashes between Turkey and Washington’s Kurdish allies.

But Ankara pressed on with a new offensive nearby on the Kurdish forces that Washington trains and arms.

Erdogan last week vowed to crush Syrian Kurdish fighters east of the Euphrates, where some 2,000 US forces stand alongside the SDF.