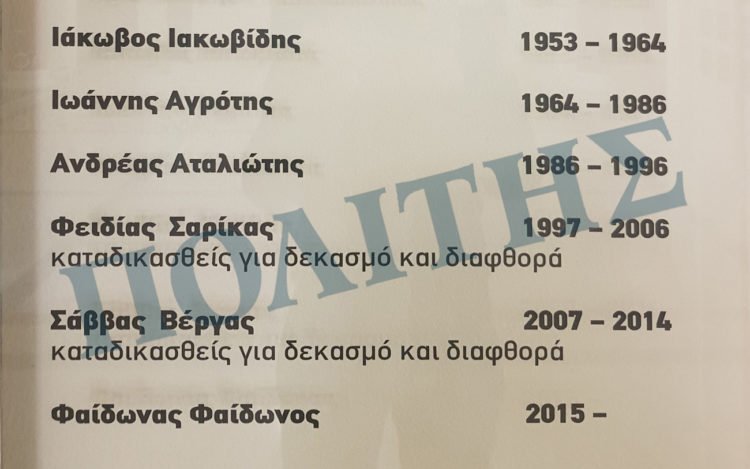 Paphos’ municipal council decided on Monday to remove a sign with mayors’ names after certain political parties objected to the fact that two were accompanied by notes stating they had been jailed for corruption.

The council discussed the issue concerning the names of Savvas Vergas and Phidias Sarikas, both of whom had been jailed for corruption relating to the construction of the town’s sewerage system.

Councillors eventually voted to remove the sign and put up one with the names of late former mayors.

Initially, the sign outside the conference room included a note under the names of the two mayors stating they had been jailed on corruption charges.

Councillors belonging to Vergas’ party, Diko, Sarikas’ Edek, as well as Akel – which saw its own councillors going to jail for the same reason — and two other members, apparently took offence and asked for the accompanying text to be removed.

Their proposal received 10 votes, as did that of Disy, to have only the late mayors’ names on the wall, which was eventually adopted after incumbent Phedonas Phedonos provided the winning vote.

In a post on his Facebook page, Phedonos said the decision not to remove the names of the two disgraced former mayors but to include the note underneath was made for historical reasons.

It would be wrong to have a gap for the years the pair were in office since it is a fact that the two had been elected as the town’s mayors, he said.

What does Remembrance Day mean in Cyprus?

Cyprus rapper an artist for the thinking man