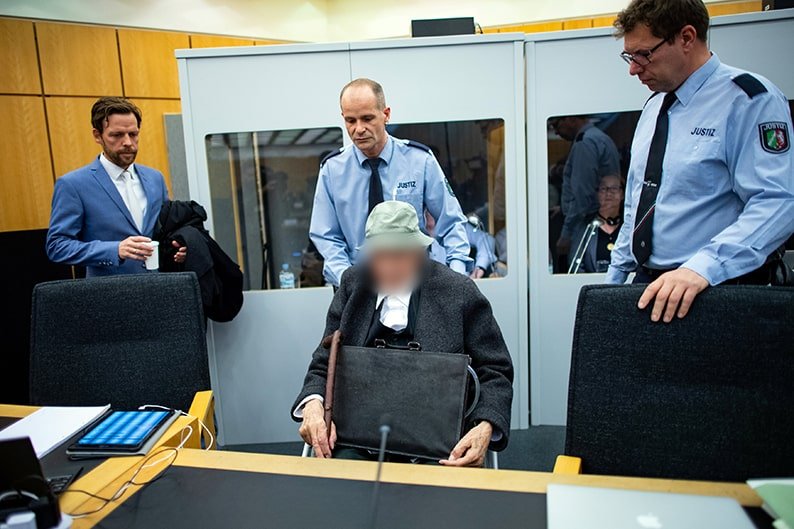 A 94-year-old wheelchair-bound man appeared in court in Muenster, Germany, November 6, 2018, accused of helping to murder hundreds of people at a Nazi concentration camp during World War Two, in what is likely to be one of the last such trials. The man, a former guard in the SS paramilitary wing of Hitler's Nazis who cannot be named for legal reasons, has denied the accusations.

A 94-year-old German appeared in court in a wheelchair on Tuesday accused of assisting in the murder of hundreds of people at a Nazi concentration camp during World War Two, in what is likely to be one of the last such trials.

The man, a former guard in the SS paramilitary wing of Hitler’s Nazis who cannot be named for legal reasons, has denied the accusations. He spoke with a hoarse-sounding voice when answering questions about his identity.

The man is accused of knowing about killings between 1942 and 1944, when he served in the Stutthof camp, near what is now the Polish city of Gdansk. About 65,000 people, including many Jews, were murdered or died there, according to the museum’s website.

The suspect, who could face up to ten years behind bars if convicted, strained to listen to proceedings and was provided with earphones when he said he could not hear.

Chief Prosecutor Andreas Brendel told the court that the suspect, as a guard at Stutthof where people were gassed and killed in many different ways, was accused of taking part in several hundred murders.

“People were killed with a shot in the back of the head. People were left to starve, to freeze. There is hardly a method of killing that did not take place in Stutthof,” said Brendel.

“In the face of evil, there is no neutrality,” said Christoph Rueckel, a lawyer representing co-plaintiffs, some from the United States and Israel.

The suspect is being tried in a youth court because he was under 21 at the time of the suspected crimes. Court sessions have been limited to a maximum of two hours per day because of his physical frailty and the hearing overall has been scheduled to run until mid-February.

The suspect is expected to make a statement later in the trial.

Some 21 Nazi leaders, including Hermann Goering and Rudolf Hess, were put in the dock at an international military tribunal in 1945-1946, known as the Nuremburg trials, but the West German justice system did little to bring further prosecutions.

The 2011 conviction of Sobibor death camp guard John Demjanjuk gave impetus to prosecutions against junior ranking individuals in the Nazi death machine. That was the first time working in a camp alone was sufficient grounds for culpability, with no proof of a specific crime.

With the number of suspects dwindling due to old age, Brendel, one of Germany’s most active Nazi hunters, said this trial had major historical significance.

“It is important for the victims, their families and survivors. They can make public their fate and help ensure that something like what the Nazis did never happens again,” he said.