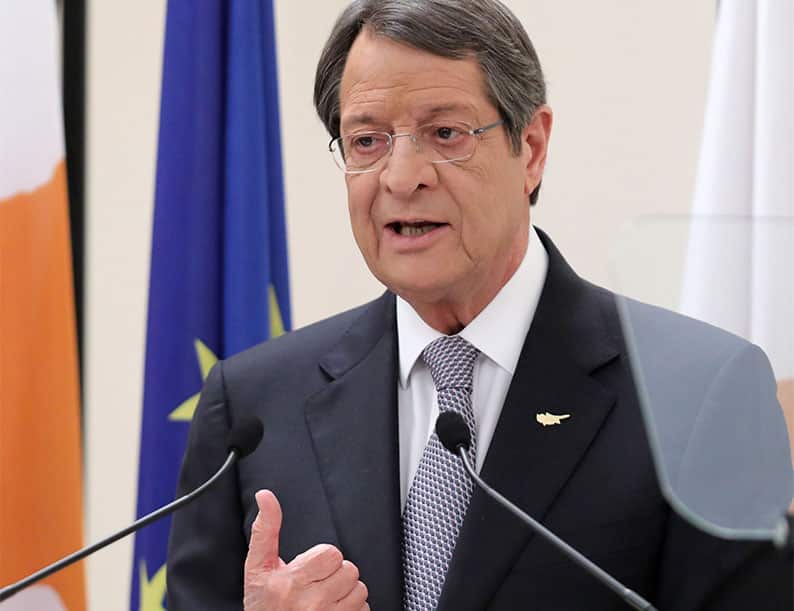 Opposition parties and Turkish Cypriots were quick to pounce on President Nicos Anastasiades’ public proposal for a decentralised federation on Wednesday, saying he failed to address crucial power-sharing issues and accusing him of trying to cover up his failed policy on the Cyprus problem.

Anastasiades presented to the public on Tuesday his proposal of a decentralised federation, aiming to address the concerns of both communities and push for a functional and viable solution to the Cyprus problem.

Without going into too much detail, Anastasiades said that the decentralisation of powers concerning the daily lives of citizens was food for thought. He called on political leaders to engage in dialogue with him to develop together positions to lead to a new round of talks and a solution acceptable to both communities.

With the exception of ruling Disy that said it would back the president, opposition parties did not appear impressed by the idea.

Main opposition Akel said that Anastasiades’ only achievement was to add to the existing confusion.

While Akel spokesman Stefanos Stefanou welcomed the president’s expressed intention of staying true to a solution based on a bizonal, bicommunal federation, he was highly critical of the way Anastasiades said he would deal with “the controversial” issue of decentralised powers by getting an opinion from international relations experts before deciding.

“He opened the issue without even knowing if there are powers that can be decentralised and which these are,” Stefanou said.

When questioned after his address on Tuesday on this demand, Anastasiades presented the EastMed pipeline as an example. If an EU study finds that the project is viable, he said, then the Republic of Cyprus or the federal state would sign an agreement along with Israel, Greece and Italy.

“If the issue is brought up in cabinet, and keeping in mind Turkey’s and the Turkish Cypriots’ position is that it [a gas pipe] should pass through Turkey, will there be a Turkish Cypriot positive vote?” Anastasiades asked.

Stefanou wondered whether Anastasiades, by bringing up the positive vote issue, which has already been rejected by the UN secretary-general himself, “would like to reopen this issue, and if he really believes that this way, negotiations could ever be resumed.”

Diko leader, Nicolas Papadopoulos, said that Anastasiades had given no answer to any of the questions his party raised at the National Council and failed to explain what he meant by ‘decentralised federation’.

The deadlock on the Cyprus issue will not be resolved by proposals worse than the existing, negative proposals, he said.

“We have not yet understood how the so-called ‘effective participation’ (veto) sought by the Turkish side, will be overturned by the ‘decentralised federation’,” he said, adding that his party expected clarifications.

Edek said that Anastasiades confirmed that his proposal for a decentralised federation does not change the essence “of the dangerous and failed process that has been going on for four decades”.

Anastasiades’ proposal, the party said, does not negate all those provisions that self-evidently cause dysfunction in one state, “which is why they do not exist in any state of the world.”

Both the Citizens’ Alliance and Solidarity Movement were equally scathing, with Solidarity leader Eleni Theocharous saying that Anastasiades’ speech marked the end of an era for the bizonal, bicommunal federation and that the president had admitted the failure of his policy.

Baris Burcu, spokesman of Turkish Cypriot leader Mustafa Akinci, said on Wednesday that  Anastasiades indicated that he was unable to digest the political equality of the Turkish Cypriot side, part of which is effective participation in decision-making.

He said that Akinci will hold a press conference on the evening of November 12.

Burcu said that, Anastasiades, neither at his public address or at his meeting with Akinci has clarified what he means by ‘loose’ or ‘decentralised’ federation. It was not clear what responsibilities will be given to the constituent states.

He referred to Akinci’s earlier statements that the Turkish Cypriot side would not refuse to discuss the issue of responsibilities to be transferred to the constituent states, as long as the necessary clarifications were given and the process was not open-ended.

“Against our appeals, for the hydrocarbon field to become one of cooperation, Mr Anastasiades preferred that it remains a field of tension and that is very regrettable.”

US opera premieres in Cyprus