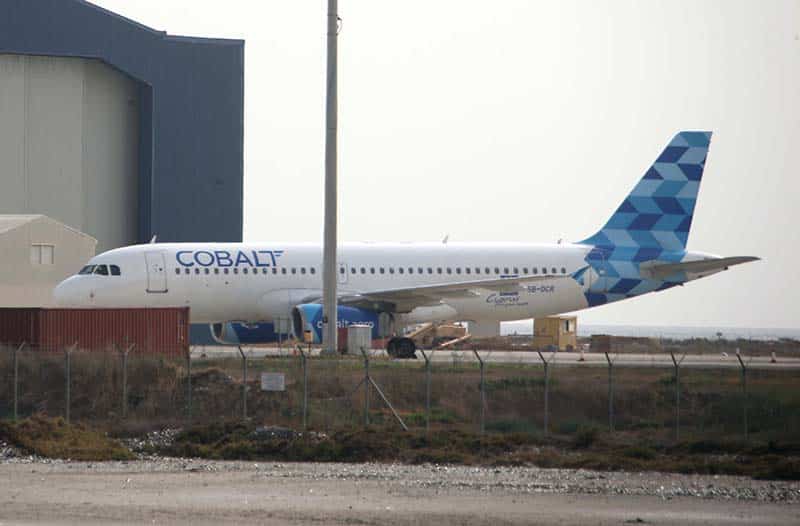 The six aircraft leased by now-defunct Cobalt have been stranded at Larnaca airport, with unpaid creditors of the airline parking vehicles around them to physically prevent them from leaving, the Cyprus Mail has learned.

Sources familiar with the matter confirmed that a number of Cobalt creditors – companies who provided various services to the airline – have secured court injunctions against the company as they seek to recover what is owed to them.

The sources, who did not wish to be named, said creditors have literally blocked the Airbus jets using trucks and cars.

The same sources confirmed that Avolon, a Dublin-based international aircraft leasing company, had sent crews to Cyprus in a bid to secure the planes, only to return empty-handed.

This has been ongoing ever since the airline grounded its aircraft on October 17.

“The situation in the wake of Cobalt’s demise has become extremely complex,” the sources said.

One question that is unclear is who would foot the bill for the delayed handover to the aircraft leasing company, although it is not out of the realm of possibility the Cypriot state – effectively the taxpayer – may pick up the tab.

The head of the Civil Aviation Authority could not be reached for comment.

But the same sources told the Cyprus Mail that, in addition to private creditors pursuing Cobalt, the airline also owes about €1m to Eurocontrol, the international organisation responsible for air traffic management across Europe.

In early October, a lien was placed on two of the airline’s jets, after Cobalt failed to pay the lease fees on time. It was the first concrete sign the company was in trouble.

The typical monthly lease on an aircraft is around €500,000.

Then in mid-October, the company’s Chinese backers decided to pull the plug, realising that Cobalt was a money pit.

When last-minute efforts to find new investors failed, the airline proceeded to ground its fleet, and Cypriot authorities revoked its operating license.

According to Alecos Michaelides, former head of the Air Transport Licensing Authority, an audit of the company accounts showed that Cobalt had been accumulating €30m in losses per year.

Our View: Treatment of north-bound tourists at airport ‘unacceptable’