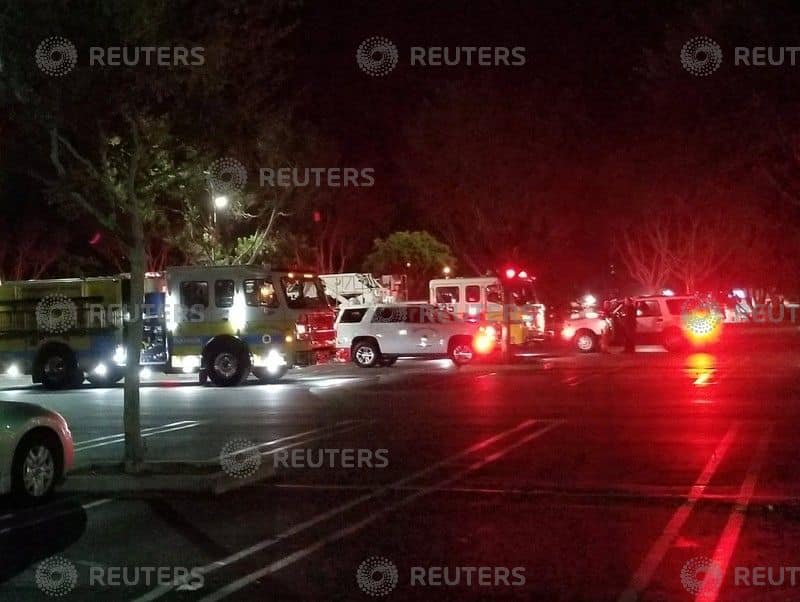 A US Marine Corps veteran opened fire on a crowd of mostly college students and young adults dancing at a crowded country and western bar in a suburb of Los Angeles late on Wednesday, killing 12 people including a sheriff’s deputy.

He said he appeared to have shot at random, using only a Glock .45-caliber handgun. There was no known motive.

An unknown number of people were wounded in the shooting at the Borderline Bar and Grill, a popular venue with college students and young adults in the suburb of Thousand Oaks. Wednesday was dubbed “College Country Night”.

“It’s a horrific scene in there,” Dean said earlier. “There is blood everywhere and the suspect is part of that.”

It was the third mass shooting in the United States in under two weeks, six days after the death of two women at a yoga class in Tallahassee, Florida and 12 days after a gunman killed 11 worshippers at a synagogue in Pittsburgh, shouting “All Jews must die”.

Jerry Nadler, the top Democrat on the House Judiciary Committee, said lawmakers would get to work on legislation including universal background checks when the House of Representatives convenes in January with a Democratic majority.

“We must find a way to stop the senseless, and many times preventable killings that are robbing our country of innocent lives,” he tweeted.

President Donald Trump, who has resisted a surge in calls for tougher gun controls since 17 students were shot dead at Stoneman Douglas High School in Florida earlier this year, said on Twitter that he had been “fully briefed on the terrible shooting in California.”

Thousand Oaks was named the third-safest city in the United States for 2018 by the website Niche.

“I’ve learned it doesn’t matter what community you’re in,” Dean told reporters when asked if he was surprised this happened in Thousand Oaks. “It doesn’t matter how safe your community is. It can happen anywhere.”

Deputies were at the suspect’s house seeking a search warrant. The gun used in the attack was a Glock handgun, which is designed to hold up to 10 rounds and one in the chamber.

“This weapon did have extended magazines on it,” Dean said. “We do not know at this time how many rounds were actually in the weapon or how many rounds the magazine could actually hold because it’s still being processed as part of the evidence.”

Tristan Appleby, a witness who was at the bar, told CNN that the shooter was dressed all in black, and that the security guard at the front of the bar was shot early on in the assault. Appleby said he saw the suspect fire off about a dozen shots, including at those already wounded and lying on the floor.

California Lutheran University, a private liberal arts school, is less than 5 miles away from the bar where the shooting attack took place and it is a popular venue with many students attending the university.

School officials said in a statement on its website that classes on Thursday were cancelled and the university community was invited to gather at the chapel.

Multiple students from Pepperdine University, a private school in Malibu about 20 miles away south from the bar, were also at the venue and the school said on Twitter that it was working to identify and provide support to those students.

The dead officer was identified as Sergeant Ron Helus, a 29-year veteran of the department, Dean told reporters. Helus and a California Highway Patrol officer were the first to arrive at the bar and went inside just before 11:30pm PST (0730 GMT).

In a statement the sheriff’s office said there would be a procession in honor of Helus, who leaves behind a wife and son, on Thursday at 10 a.m. “Ron’s selfless, heroic actions will never be forgotten,” the statement read.

Witness Taylor Von Molt, 21, who said she was a promotor at the bar, said the gunman wore a black mask with a bandana covering the bottom of his face, and a black hoodie.

“I heard what I thought was a balloon pop,” she told CNN.

“I was confused because we didn’t have any balloons. I saw him, then I saw him fire his weapon one more time. I ran to the nearest exit and tripped and fell on the way and people kept running on top of me.”

Von Molt said she and others from California Lutheran University often gathered there to line dance to country music.

Witness John Hedge told ABC News he was near the front door of the California bar when the shooting began.

“I just started hearing these big pops. Pop pop pop,” he said. “There was probably three or four. I hit the ground. I look up. The security guard … was shot, he was down. The gunman was throwing smoke grenades all over the place. I saw him point to the back at the cash register and he just kept firing.”

Dean estimated that 10 to 15 people, including one with a gunshot wound, had gone to area hospitals. He said he thought their injuries were minor, and that most of them were likely injured as they escaped, some by breaking windows.

None of the civilian victims were identified. Helus died while being treated at an area hospital several hours after he was shot, Dean said.

A kaleidoscope of an exhibition