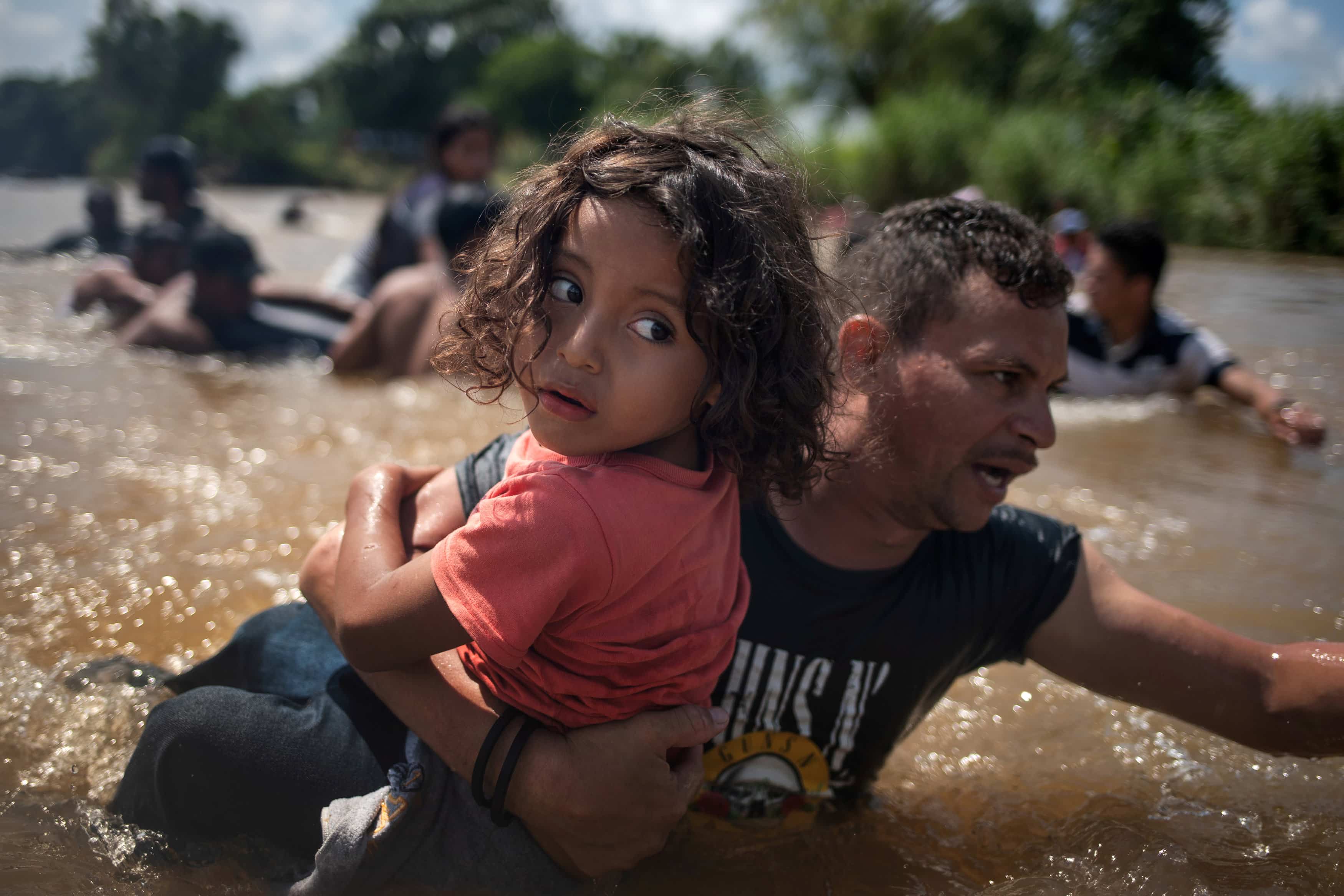 Luis Acosta holds 5-year-old Angel Jesus, both from Honduras, as a caravan of migrants from Central America en route to the United States crossed through the Suchiate River into Mexico from Guatemala in Ciudad Hidalgo, Mexico

Cradling a baby in his arms, the Central American man looks up fearfully as he scrambles away from a wall of Mexican police in riot gear.

Thousands of migrants, mostly Hondurans fleeing poverty and violence, have been traveling in a caravan towards the United States in recent weeks. On Oct 19, some of them rushed through Guatemalan border gates onto a long bridge connecting to Mexico. But the surge was halted by Mexican federal police.

Reuters photographer Ueslei Marcelino was on the bridge and captured the picture of the man with the child.

“The migrants had already broken through the first police barricade on the Guatemalan side of the bridge. After a while, they moved towards the second barricade on the Mexican side,” said Marcelino.

“Suddenly women and children formed a line and started to walk towards the police. There was a bit of pushing and shoving, and then things started to get increasingly chaotic.”

Eventually, Mexican police pushed the migrants back to the Guatemalan side.

Many of the migrants spent that night on the bridge, while hundreds of others eventually chose to jump into the Suchiate River below in a bid to reach Mexican soil. Within a few days, as many as 10,000 migrants had entered Mexico, caravan members said.

When Reuters photographer Leah Mills saw migrants jumping into the river from the Guatemalan side, she waded in and captured an image of an exhausted-looking man carrying a child.

“To me this shows how desperate these people are. They are willing to cross rivers with strong currents, to lose any belongings they had, to struggle through the water with their children.”

Reuters photographer Adrees Latif saw a human cordon being formed in the river by migrant men, locking arms to make sure no-one was swept away.

“A family that had made it to the middle of the river was handing their children to other men to help them reach the shore,” he said.

As a man grabbed the girl in front of him and took her to safety, Latif followed.

“This photograph begs the question: why would a family leave home and not only risk their own lives but also the lives of their children by doing such extraordinary things? What propels someone to walk without knowing where they will next break bread or quench their thirst?”