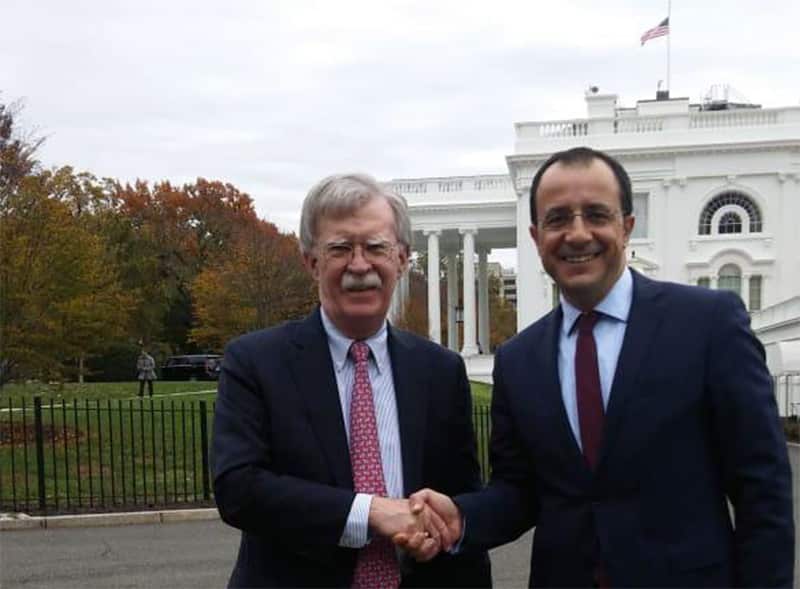 Christodoulides at the White House

The government has never questioned the notion of political equality of Turkish Cypriots, Foreign Minister Nicos Christodoulides, said on Thursday.

Reactions to President Nicos Anastasiades’ proposal on decentralisation of powers in a future federal state were due to misinterpretation, the minister said.

Christodoulides, who is currently in the US for contacts, told state broadcaster CyBC on Thursday that it is believed that the UN Secretary-General’s special envoy Jane Holl Lute might return to the island so that work can begin to set the terms of reference for the new process that will lead to resumption of talks as soon as possible.

The minister was to meet US Ambassador to the United Nations Nikki Haley within the day to discuss developments on the Cyprus problem.

“This meeting will be exclusively on developments in the Cyprus issue, as they are shaped by Mrs Lute’s mission, as well as the issue of the United Nations peacekeeping force (Unficyp),” Christodoulides told CyBC.

He added he has already discussed these issues in his meetings with US officials in Washington, and is satisfied by what he heard.

“Both the US and our side are focusing efforts on a positive outcome through Mrs Lute’s mission.” The US, he said, fully supports this effort by the UN Secretary-General of the United Nations through Lute.

“We hope soon to lead to the resumption of talks.”

As regards the future of Unficyp, Christodoulides said the US has set five criteria for the operation of peacekeeping missions, one of them “is the existence of a political process.”

Christodoulides admitted that failure to reach common ground for the relaunch of the talks would make things difficult but that the focus at the moment was on paving the way for the UNSG to set the terms of reference for the new talks process.

He said that Anastasiades’ proposal of a decentralised federation concerning the powers of the central government is deemed by the government as a way out of the deadlock concerning one of the most difficult issues currently faced, that of the effective participation of Turkish Cypriots.

Christodoulides said that there is no questioning the notion of political equality of Turkish Cypriots or of their effective participation in a future central government.

On criticism by opposition that Anastasiades’ proposal widens the gap between the two communities, he said, that this was probably due to misinterpretation.

All these issues, he said, will be discussed in detail with Lute within the framework of the mission that is expected to be launched.

On the Statement of Intent he signed with the US on behalf of Cyprus earlier in the week, Christodoulides said that this defines, for the first time, the framework of cooperation between the two countries on security issues concerning bilateral relations and in the Eastern Mediterranean region.

He said he also discussed with US officials a large number of bilateral issues concerning, among other things, double taxation avoidance and US visa requirements for Cypriot citizens. These issues, he said, will now “begin to enter a new basis.”

He added that the US will also participate in topics of its interest in the tripartite relations Cyprus has forged in the region.

“In the immediate future, there will be tripartite meetings at both foreign ministers and heads of state level, and we will discuss which of these meetings will involve the US,” he said.

The same applies also for other EU member states, he said. “There are member states of the European Union with which we are in advanced consultations, precisely to determine the context and the themes of their participation in these formations of the region, for which it is acknowledged that the results they produce are particularly decisive for stability in the Eastern Mediterranean.”

While in US, Christodoulides also met US Secretary of State Mike Pompeo and Assistant Secretary for European and Eurasian Affairs Wess Mitchell.