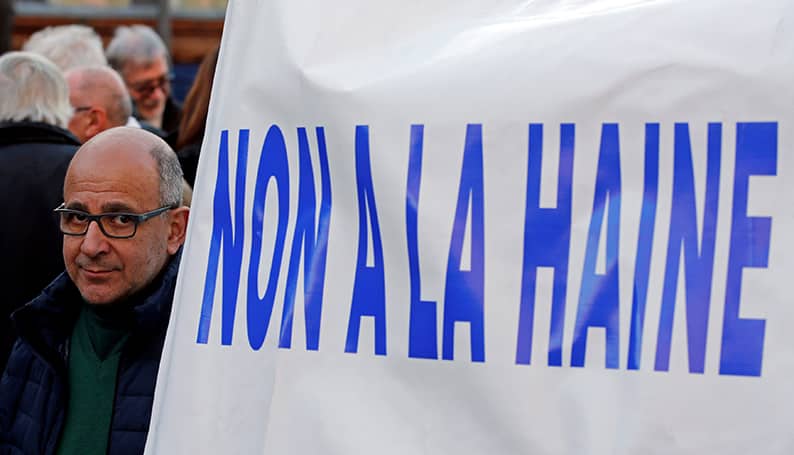 People attend a gathering in memory of Mireille Knoll, an 85-year-old Holocaust survivor stabbed to death and burnt in her Paris apartment in an apparent anti-Semitic attack

Violence against Jews and other acts of anti-Semitism have surged in France in the past nine months, Prime Minister Edouard Philippe said on Friday, promising stepped-up action against perpetrators.

Citing new government statistics, Philippe said acts of anti-Semitism had risen 69 per cent in the year to September, compared with the same period in 2017, an increase he said should worry everyone in France. In the two previous years there had been a downward trend in the figures.

“Not remaining indifferent means taking better care of victims, acknowledging their complaints and more efficiently punishing those who carry out attacks,” Philippe said in a post on his Facebook account.

In recent years there have been a number of high-profile attacks targeting the Jewish community, most notably the killing of four Jews in a kosher supermarket in January 2015.

That attack, carried out by an Islamic State-inspired militant, prompted an increase in Jewish emigration to Israel.

In March, an 85-year-old Jewish woman was stabbed to death and set alight in her apartment in Paris by two attackers, who were charged with murder motivated by anti-Semitism.

There have also been a number of Jewish tombs desecrated, anti-Semitic graffiti scrawled on walls near synagogues, or on the doors of homes and businesses owned by Jews.

“We have seen a very strong increase in anti-Semitic messages on the internet,” said Francis Kalifat, president of Crif, an umbrella organisation representing French Jews.

Philippe said the government would appoint special magistrates and prosecutors to tackle the problem and launch awareness programmes in public schools.

“The feeling of insecurity is real and justified,” Mario Stasi, chairman of France’s league against racism and anti-Semitism, told BFMTV. “Some Jews are leaving areas within France to seek haven elsewhere.”

Also on Friday, German Chancellor Angela Merkel said her country had a moral duty to fight a resurgence of anti-Semitism there. She was speaking at a synagogue in Berlin to mark the 80th anniversary of the “Kristallnacht” pogrom against Jews in Nazi Germany.