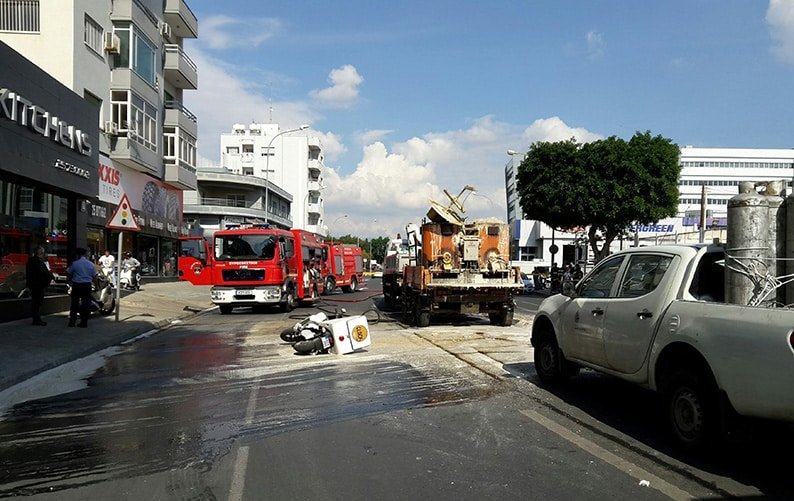 The scene of the explosion in Limassol

The explosion in which two people were injured in Limassol on Friday morning could have been much worse if it wasn’t for the swift response by a police officer and public workers.

The off-duty officer happened to be near the scene when the lorry, used to paint road markings, caught fire and caused an explosion at 11am on Omonia avenue.

Right after the blast the officer, together with some of the road workers managed to remove large bottles of liquefied petroleum gas located close to the fire while they also used fire extinguishers in an attempt to tame the blaze.

Because of their swift intervention, just two people were slightly injured because of the explosion. The vehicle’s driver and a passing motorcyclist, a deliveryman, were treated for minor burns in hospital. The police officer and another man, 32, also went to Limassol general hospital because of respiratory problems.

The fire was put out by the fire services and the scene was cordoned off.

Inspectors from the labour inspection department also went to the scene, as the incident is being treated as a work accident.

According to news reports, there could have been other worse injuries because hot paint splashed onto the road and on passing vehicles.

The cause of the incident is not yet clear.

Austrian colonel suspected of spying for Russia for decades

Christodoulides certain that talks’ parameters will be set soon