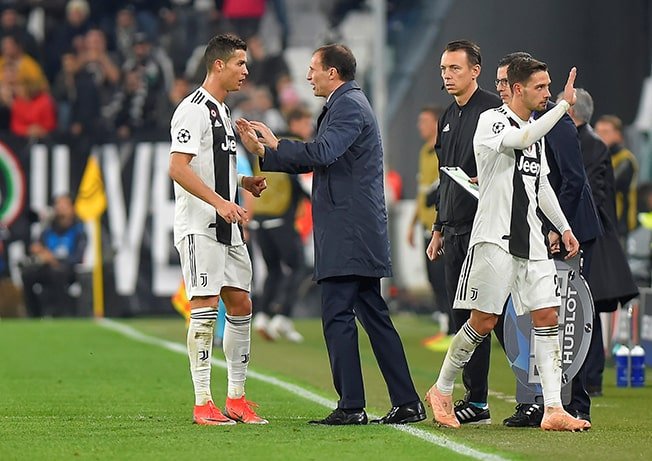 The Bianconeri had not lost or conceded a goal in this season’s Champions League until Premier League club United arrived in Turin on Wednesday.

Despite the fact Cristiano Ronaldo put the Italian champions ahead with an exquisite volley, Juan Mata’s late equaliser and Leonardo Bonucci’s even later own goal gave Jose Mourinho’s men the win.

Allegri must now lift his crestfallen players for Sunday’s trip to San Siro, where he will plot an 11th Serie A victory of the season at the expense of his former employers AC Milan.

The Juve boss told his club’s official website: “After the defeat everybody is feeling awful because we are not used to losing (at home) having not done so since April.

“We played a good match the other night, but we lost, and that really troubles me because we can’t boast about well-played matches but only about games we’ve won.

“The only thing we got wrong was failing to manage the match properly after conceding the equaliser.

“We were too wrapped up in emotions because the leveller seemed so unfair, and we should have instead been thinking clearly.

“We obviously weren’t going to win the Champions League on Wednesday night but we could have taken a step towards securing first place in the group.

“When you can’t win matches, you’ve got to make sure you don’t lose them. But sometimes you have to take one step backwards to take two steps forwards.”

Allegri has a fully-fit squad, with the exception of Emre Can and Leonardo Spinazzola, while Douglas Costa and Federico Bernardeschi are expected to return to the starting XI.

Lining up against the leaders is Gonzalo Higuain, who joined Milan from Juve in the summer.

Allegri said of the Argentinian: “He did a lot for Juve and it will be nice to see him again.

“Milan have made a great signing there because Gonzalo is one of the best strikers in the world.”

Rossoneri defender Cristian Zapata, however, has singled out Higuain’s replacement Ronaldo as their main threat.

He told La Gazzetta dello Sport: “Ronaldo is a player who will hurt you if you give him an inch of space: he’s quick, strong in the air and you need to be on him the whole time.

“I marked him when I played for Villarreal and stuck to him for the whole game. By the end he seemed pretty angry with me!

“He’s an extraordinary player – he’s proved that across his entire career.”

No goals but huge emotion as Leicester honour late owner