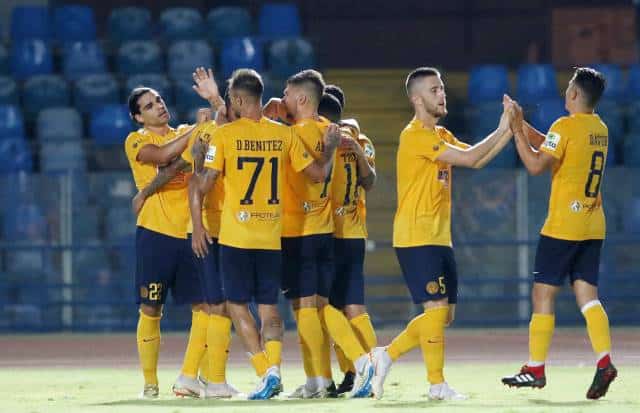 AEL have surprised quite a few people with their impressive start to the season, having dropped only two points and conceding just a couple of goals in their opening eight games

The Limassol derby between leaders AEL and third-placed Apollon is by far the most intriguing tie of the weekend in Cyprus, with the Famagusta derby between Anorthosis and Nea Salamina playing second fiddle.

In the past few seasons the big Limassol derby would attract more than 5,000 supporters but with the boycott imposed by the organised fans of most first division clubs due to the fan card still in place, less than half are expected to be at the Tsirion on Saturday afternoon.

That’s good news for the Limassol cafes and pubs that are expected to be crammed with the supporters of the two sides.

AEL have surprised quite a few people with their impressive start to the season, having dropped only two points and conceding just a couple of goals in their opening eight games. They have defeated two of the ‘top six’ sides (Anorthosis and AEK) and drew with Apoel, all away from home.

Dusan Kerkez’s side has been playing simple but effective football and has shown a resilience that has been lacking the past few years. Their current style of play is reminiscent of the way they played under Pambos Christodoulou in 2014 when they last won the championship.
Defenders Kevin Lafrance and Christos Wheeler, along with midfielders Manuel Torres and Alex da Silva, have all been pivotal in AEL’s fine start to the season and are all certain to start the game.

Da Silva will be coming up against his former team and given his rather acrimonious departure will want to prove that Apollon were wrong to let him go.

Apollon failed to win in their last couple of league games and coach Sofronis Avgousti, seeing that his side’s chances of progressing in the Europa League were limited, dropped a number of key players for Thursday’s 3-2 defeat against Eintracht Frankfurt to allow them more time to rest.

Avgousti will be without the injured Yuste and Carayol but he will be glad to see Kevin Bru back after injury, as well as his midfield enforcer Esteban Sachetti, who has served a one-game suspension. The Argentinian is the only player that Avgousti has not been able to find adequate cover for.

Expect to see plenty of full-blooded tackles and swinging arms in this ‘no-dare-lose’ Limassol derby.

Fourth-placed Nea Salamina make the short trip to the Antonis Papadopoulos to face fellow Famagusta side Anorthosis.
Salamina have been a joy to watch this season under Savvas Poursaitides and perhaps for the first time in a number of years they will be favourites to take the three points.

Anorthosis coach Jurgen Strebel has a lot of problems to overcome with his first choice central defensive pairing of Douglao and Shildenfeld both suspended while midfielder Igiebor underwent surgery and is not expected back before the new year.

There was some good news for the Dutch coach as three players that were doubtful for the game – Laborde, Pranjic and Duris – were included in the 20-man squad. It remains to be seen though if they are deemed fit enough to start.

Bottom side Ermis Aradippou tussle with Pafos FC while in the last game of Round 9 on Monday night, Alki take on AEK.