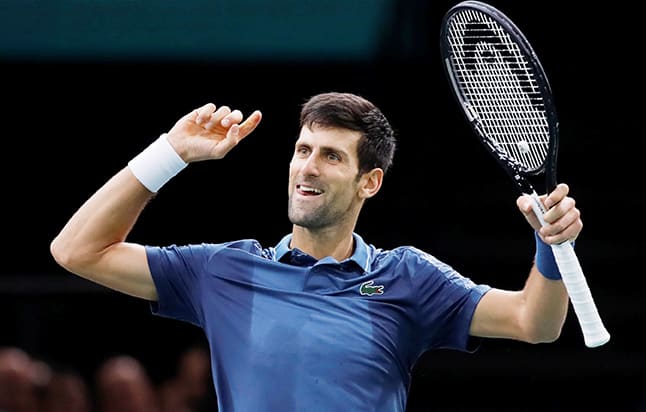 When Novak Djokovic began the year outside the top 10 and battling the elbow injury that sidelined him for the second half of 2017, few imagined he would arrive for the season-ender in London back as world number one

Novak Djokovic can now add the ‘Comeback Player of the Year’ award to his vast collection of honours and the Serb can complete his remarkable resurgence by winning a record-equalling sixth title at the ATP Finals next week.

When Djokovic began the year outside the top 10 in the ATP rankings and battling the elbow injury that sidelined him for the second half of 2017, few imagined he would arrive for the season-ender in London back as leader of the pack.

Rafael Nadal’s hopes of clinging to top spot ended when he pulled out of the ATP Finals with abdominal and ankle injuries while Argentina’s Juan Martin del Potro misses out with a knee injury having qualified for the first time since 2013.

Six of the world’s top eight are present though including perennial London favourite Roger Federer who, aged 37, will be appearing at the ATP showpiece for the 16th time looking for a seventh title and a first since 2011.

He marked down Djokovic as the favourite during his pre-tournament news conference on Friday.

“It’s really only Novak who can say ‘If I play as well as I have the last three months then maybe I can win the ATP Finals as well’,” the Swiss, who begins in Lleyton Hewitt group against Japan’s Kei Nishikori on Sunday, told reporters.

“But that’s never a given because best-of-three-set matches indoors, the margins are slimmer and it can slip fast.”

After admitting he returned too soon from elbow surgery in February, his game clicked into gear at Wimbledon where he beat Nadal in a classic semi-final then swept past Kevin Anderson to the title.

He posted a 22-match winning streak from Cincinatti to the Paris Masters, taking in the U.S. Open where he beat Del Potro to earn his 14th Grand Slam title and go equal third on the all-time list with Pete Sampras, behind only Nadal and Federer.

“Being (ranked) number one is probably the ultimate challenge in our sport and the pinnacle of the season,” Djokovic, voted by his fellow professionals as the Comeback Player of the Year, told reporters.

“It’s extra special this season because of the whole journey I’ve been through the past 15 months, particularly the last eight months, after surgery in February.

“Quite incredible, not just that I was ranked 22. I never thought it was impossible but I thought it might take more time. It turned out to be a perfect five months.”

Isner hopes to make a similar impact to compatriot Jack Sock, who reached the semis on his debut last year before losing to eventual champion Grigor Dimitrov.

“It means a lot to be here,” Isner said. “Been pretty close throughout my career, but it never happened.”

On facing Djokovic first up, he said: “I’m up against it for sure. He’s had an incredible second half to the year. I don’t have much to lose, so I’ll play loose and free.”

Anderson is the other debutant and will become the first South African in 23 years to grace the season-ender.