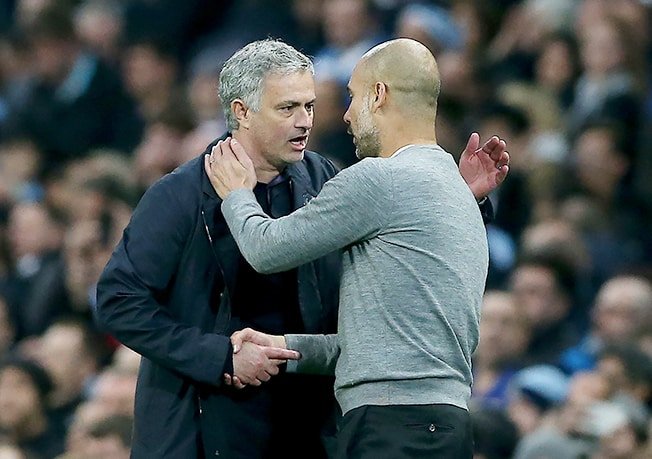 Pep Guardiola has warned his Manchester City team to be ready – because Manchester United will have their moments in Sunday’s derby.

City have thrashed Southampton and Shakhtar Donetsk 6-1 and 6-0 respectively in the past week but Guardiola is expecting something much different as the Premier League leaders face improving United at the Etihad Stadium.

The City boss said: “Against the top teams like United, Chelsea, Tottenham, Liverpool – you cannot imagine for 90 minutes we are going to play amazingly and not give them a chance.

“When they have the ball and the people in front – wow – they can create something.
“They have an incredible amount of talent up front and in the middle as well. That is why we have to defend deep and strong, defend the crosses and avoid set-pieces as they are huge and far better than us.

“We have to control more for as many minutes as possible and be clinical. That’s the game we’ll try to do.
“What we have to do is try to play good. If we don’t we have no chance to win.”

City were outplaying United when the sides last met but let their guard slip to surrender a 2-0 lead and lose 3-2.
Guardiola said: “For 75 minutes I’d like to play the same game as against United in April but United have shown us they need only 10 or 15 minutes to create a lot of chances.”

United have lifted the gloom that was surrounding Old Trafford about a month ago, when manager Jose Mourinho was under the most pressure, with some positive results in recent weeks.

On Wednesday they came from behind to claim a famous 2-1 victory at Juventus in the Champions League.
Guardiola said: “No doubt about that – they’ve improved. I see a team with a lot of commitment, aggressive without the ball, everybody runs in front and everybody runs in behind the ball. A team has good and bad moments and at this moment they have confidence.”

Mourinho meanwhile is ready to go toe-to-toe with “untouchable” City in the eagerly-anticipated derby as United look to emerge from a daunting double-header with another memorable away win.

Wednesday’s 6-0 defeat of Shakhtar underlined the quality of Sunday’s opposition, but life off the field is not as rosy as City face allegations that they have tried to cheat European football’s Financial Fair Play rules.

Asked if he felt United were operating on a fair playing field ahead of the derby, Mourinho said: “It’s difficult for me to answer because I focus on my job, I focus on the four lines.

The allegations about City’s finances have been made by German publication Der Spiegel, citing documents and private emails obtained from the whistle-blowing group Football Leaks.
City have described the reports as the product of an organised attempt to damage the club’s reputation, based on “materials hacked or stolen”.
Mourinho sidestepped the allegations and instead praised a side that he hopes to go toe-to-toe with, just as he did at Juventus and in the recent 2-2 draw at Chelsea.

The United boss said: “We are going to try. I cannot say we are going to be successful in our motivations, in our desire, but we played two difficult matches away against two very good teams, Chelsea and Juventus, and we managed to get good results.

“And even if the good results were not in our pockets, the performances were there, the positive attitude was there, so we are going to try. But you are right, Manchester City is a very powerful team.”

Yet United know they can hurt Guardiola’s side, having come from behind to win 3-2 at the Etihad Stadium in April and delay their title party.

Our View: Anastasiades sheds light on why two-state solution appeals to him